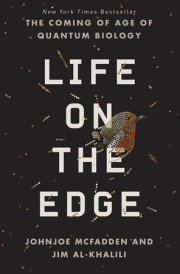 Life on the Edge: The Coming of Age of Quantum Biology

Acclaim for Life on the Edge

A Financial Times and Independent Best Book of the Year (UK)

“McFadden and Al-Khalili draw readers into a revolutionary new paradigm. . . An intellectually exhilarating visit to the baffling frontiers of science!” —Booklist (starred)

“The elemental provocation of the book lies in the authors’ ability to make the complex conceivable . . . McFadden and Al-Khalili give sure footing to the anything-goes bafflement of quantum theory.” —Kirkus Reviews

“The book elegantly opens up a new way of looking at nature.” —The Independent, “Books of the Year”

“A really original science book about a new field of research . . . groundbreaking.” —Financial Times,“Books of the Year”

“Coherence is just one of the complex phenomena that Jim Al-Khalili and Johnjoe McFadden set out to teach the reader. They succeed by using delightfully revealing analogies and similes, some borrowed from their prior work, that make slippery concepts sit still for study.” —The Economist

“Hugely ambitious. . . . The skill of the writing provides the uplift to keep us aloft as we fly through the strange and spectacular terra incognita of genuinely new science.” —The Times (UK)

“This thrilling book is an overview of a field that barely exists. . . . Al-Khalili has a genius for illustrating complex ideas via imaginative sidetracks.” —The Sunday Telegraph

“The great virtue of this book is its thesis—it sets out a clear and enthusiastic argument for the importance of quantum biology.” —New Scientist

“Life on the Edge gives the clearest account I’ve ever read of the possible ways in which the very small events of the quantum world can affect the world of middle-sized living creatures like us. With great vividness and clarity it shows how our world is tinged, even saturated, with the weirdness of the quantum.” —Philip Pullman

“This illuminating account of an important new field is a wonderfully educative read.” —A. C. Grayling

Being in two places at once, traveling through impenetrable barriers, possessing mysterious telepathy across great distances—the behavior of the particles that are the building blocks of the universe sounds like the stuff of science fiction. Existing at such a microscopic level as to be almost in another realm, the world of quantum mechanics seems governed by a completely different set of rules from our own reality. How can, for example, prodding one particle prompt another particle to jump instantaneously, even when they are hundreds of miles apart?

Until now, such questions about this sort of “weird quantum phenomena” have been relegated to the study of quantum physics, and have influenced the understanding of our day-to-day life very little. In LIFE ON THE EDGE: The Coming of Age of Quantum Biology (Crown; July 28, 2015), prominent biologist Johnjoe McFadden and renowned physicist Jim Al-Khalili, who recently gave a TEDGlobal Talk on the subject, suggest just the opposite, and reveal that such “weird quantum phenomena” may in fact explain some of biology’s most enduring mysteries.

First published in the UK to incredible acclaim from The Independent (which named the book one of the best of 2014), Financial Times (which also included the book on their best of the year list), The Economist, The Times, and The Sunday Telegraph, and already set to be translated into fifteen languages, LIFE ON THE EDGE leads a fascinating inquiry into the most exciting and potentially revolutionary new field of modern science. Drawing on recent groundbreaking experiments around the world, McFadden and Al-Khalili tackle such questions as how we really smell the scent of a rose, how birds navigate around the globe, how plants capture light energy, and how our genes copy themselves with such precision. In revealing how quantum biology can explain these processes, McFadden and Al-Khalili offer a thrilling new approach to our understanding of life itself.

Like Richard Dawkins’s The Selfish Gene, which provided a new perspective on how evolution works, LIFE ON THE EDGE promises to profoundly transfigure our understanding of our existence.

JOHNJOE MCFADDEN FSB is Professor of Molecular Genetics at the University of Surrey and is the editor of several leading text books. For several decades, he has pioneered molecular and systems biology approaches to infectious disease such as tuberculosis and meningitis and is a recipient of the Royal Society Wolfson Research Merit Award. He is the author of Quantum Evolution, co-editor of Human Nature: Fact and Fiction and has written many popular science articles for newspapers including the Guardian in the UK and the Washington Post. He also collaborates with several groups in the United States and has served on a number of grant panels for the National Institutes of Health.

JIM Al-KHALILI OBE is an academic, author, and broadcaster. He is a leading theoretical physicist based at the University of Surrey, where he teaches and carries out research in quantum mechanics. He has written a number of popular science books, including The House of Wisdom: How Arabic Science Saved Ancient Knowledge and Gave Us the Renaissance and Paradox: The Nine Greatest Enigmas in Science, and has presented numerous television and radio documentaries for the BBC, including the BAFTA-nominated Chemistry: A Volatile History and The Secret Life of Chaos.