Adventures on the road and in the markets 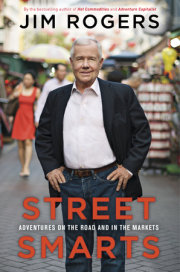 “There are almost no investment geniuses. The only ones I know of are Warren E. Buffett and John C. Bogle and Jim Rogers.”

“STREET SMARTS is another great read from one of the most astute global investors of our time.  With wisdom, humor, and amusing antidotes, the Investment Biker recounts his life’s experiences in a manner that is as entertaining as it is educational.   As an added surprise, readers may find his insight on fatherhood even more valuable than his perspective on history, economics, and the financial markets.”

Wall Street legend and bestselling author Jim Rogers, whose entertaining accounts of his travels around the world have enthralled readers, investors and Wall Street aficionados for two decades in such books as Investment Biker, Adventure Capitalist, Hot Commodities and A Bull In China, has written a compelling new book for today’s financial climate.

In the course of STREET SMARTS, Rogers explains why Asia will be the dominant economic force in the twenty-first century – and how he and his wife and two daughters moved to Singapore to prepare his family for the coming changes.  He discusses why America and the European Union are in decline, and what we need to do to right our economy and society.  Key lessons include:

The world is on the verge of a transition away from finance itself as a source of prosperity.  Throughout history, there have been periods when financiers were in charge, and there have been periods where the producers of real goods – farmers, miners, energy providers – were in charge.  In the 50s, 60s, and 70s, before the big bull market, Wall Street and the City of London were backwaters.  They will be again.  The money shufflers are in decline, and “the hewers of wood and drawers of water” will now inherit the earth.

Today the US graduates over 200,000 MBAs a year, as opposed to 5000 in 1958.  The smart move for all those MBA graduates would have been to earn agriculture and mining degrees.  Soon, stockbrokers will be driving taxis—or the smart ones will be driving tractors in order to work for the farmers – while the farmers are driving Lamborghinis.

Most successful investors do nothing most of the time.  Do not confuse movement with action.  Know when to sit and wait.

From his early years growing up in Demopolis, Alabama, to his fledgling career on Wall Street, to his cofounding the wildly successful Quantum Fund, Rogers always had a restless curiosity to experience and understand the world around him. Now, he takes readers through the highlights of his life and the lessons he learned along the way, offering surprising and provocative observations on how the world works – and what trends he sees in the future. Rogers is once again at his acerbic and storytelling best, as he effortlessly weaves together his personal experiences, what he has learned, and how to apply that knowledge to the world in which we live.