IN WARTIME by Tim Judah 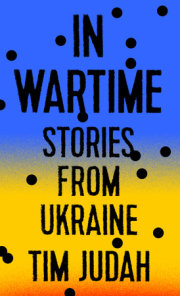 In Wartime: Stories from Ukraine

Acclaim for Tim Judah and IN WARTIME

“This fascinating and often grim portrait of Ukraine . . . contributes to a greater Western understanding of the country. . . . This work stands out by splitting the difference between a purely journalistic account and a scholarly analysis. Judah offers a compassionate human view of these conflicts, mixing personal stories, history, politics, and reportage. . . . Judah’s special and timely book will provide lay readers with an apt introduction to Ukraine, and specialists will appreciate its atypical yet enlightening approach and its insights into the social aspects of ongoing conflicts.”
—Publishers Weekly (starred review)

“An enlightening, timely study of a misunderstood region of the world”
—Kirkus Reviews (starred review)

Ever since Russia shocked the world in 2014 with its nearly overnight annexation of Crimea, Ukraine has been embroiled in an armed struggle. Misinformation reigns, more than two million people have been displaced, and Ukrainians fight one another on a second front—the war against corruption. With IN WARTIME: Stories from Ukraine (Tim Duggan Books; October 11, 2016), seasoned war reporter Tim Judah delivers a rare glimpse into the reality behind the headlines, unpacking a century of conflict to lay bare the events and misunderstandings that have turned neighbors against one another and mired Europe’s largest country in a conflict seemingly without end.

Judah is uniquely qualified to write this story, having covered the beginning of the Ukrainian war for The New York Review of Books.  Judah is the Balkans correspondent for The Economist and reported on the aftermath of communism in Eastern Europe, the Balkan wars, Afghanistan, Iraq, North Korea, Darfur, Haiti, and Uganda—with his writing appearing in The New York Times Magazine, The Guardian, The Times of London, and The Daily Telegraph, among other publications.

Making his way from Ukraine’s Polish border in the west, through the capital city and the heart of the 2014 revolution, to the eastern front near the Russian border, Judah talks to everyone from mothers, soldiers, and poets to businessmen, politicians, and historians. In Lviv, Ukraine’s western cultural capital, mothers tend the graves of the sons killed on the other side of the country. In Maidan Square, where protests that deposed President Yanukovych began, pamphleteers, recruiters, buskers, and mascots compete for attention. In Donetsk, civilians who cheered Russia’s President Putin find their hope crushed in the face of resource shortages and an unending war. Listening to their clashing explanations, Judah interweaves their stories to create a sweeping, tragic portrait of a country fighting a war of independence from Russia—twenty-five years after the collapse of the USSR.

IN WARTIME is the definitive, boots-on-the-ground dispatch from the front lines of the conflict in Ukraine.

About the Author: Tim Judah is a reporter for The Economist and a contributor to The New York Review of Books. A graduate of the London School of Economics and of the Fletcher School of Law and Diplomacy at Tufts University, Judah worked for the BBC before covering the Balkan war for The Times of London and other publications. He lives in London with his wife and five children.