In The World in the Curl, Peter Westwick and Peter Neushul share the unconventional history of surfing

Evolving from a hobby of Hawaiian kings and queens to a billion-dollar worldwide industry, surfing is as immersive in history as in sport 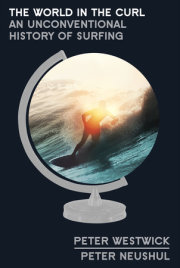 The World in the Curl: An Unconventional History of Surfing

“Westwick and Neushul’s focus on the cultural and socio-economic illuminates hidden forces that are rarely discussed by even the most knowledgeable surfers…For every enthusiast killing time before the next big swell, the authors provide a satisfying immersion into the story of how a near-extinct Polynesian pastime came back to conquer the beach.”  —Publishers Weekly

“The World in the Curl is a fascinating, fast-paced chronicle of one of the world’s most colorful sports. Westwick and Neushul have written a book that’s as immersive as it is engaging; one that does deep justice to the power and allure of the ocean itself.” —Susan Casey, author of The Wave

“The most scholarly and comprehensive history of the sport.” —Fred Hemmings, Hawaii’s 1968 world champion surfer

Surfing has become more popular than ever, with an estimated twenty million people riding waves worldwide.  The U.S. surf industry alone has sales of over five billion a year, and globally, surfing itself supports a ten billion dollar industry.  By the start of the twenty-first century, surfing had gone from exotic pastime to a lifestyle, carrying its influence far beyond the surf community to Hollywood, music, fashion, and business. Quiksilver, Reef, and Billabong have now become household names.  In fact, surf culture is woven into the fabric of societies whose members don’t even surf—so much so that you can walk through a mall in land-locked middle America and pick up a pair of surf trunks.   How did surfing gain such cultural and commercial appeal? And how can it be used to understand the modern world?

Historians Peter Westwick and Peter Neushul illuminate these questions and more in The World in the Curl: An Unconventional History of Surfing (Crown Publishers; on sale 7/23/2013).  Teachers of a popular class on the history of surfing at the University of California at Santa Barbara, they examine the enduring appeal of the sport both in myth and reality.  Drawing on their expertise as, respectively, a historian of science and technology and an environmental historian, The World in the Curl brings alive the colorful history of surfing by enlightening readers about what fueled the sport’s expansion: colonialism, capitalism, race and gender relations, multinational corporations, environmental change, and globalization.

In a highly readable and provocative narrative of the sport’s signal moments—from the spread of surfing to the U.S., to the development of surf culture, to the introduction of women into the sport—Neushul and Westwick draw an indelible portrait of surfing and surfers as actors on the global stage.

Some of the many interesting topics explored in The World in the Curl include:

Unlike writers of other books on the sport, both Westwick and Neushul are historians as well as active surfers.  With excellent research and exciting storytelling, The World in the Curl is a rich and surprising book about the unlikely rise of surfing and its influence on modern life.

PETER WESTWICK is an assistant research professor of history at the University of Southern California, the director of the Aerospace History Project at the Huntington-USC Institute on California and the West, and the author or editor of three previous books.  PETER NEUSHUL is a visiting senior associate researcher in the department of history at the University of California at Santa Barbara.  He has written extensively on defense industries, history of oceanography, and environmental history.