In his latest cookbook, James Beard Award–winning New Orleans chef Donald Link takes home cooks to a region where drinks are slung back, great food is made to be shared, and too many desserts is just the right amount 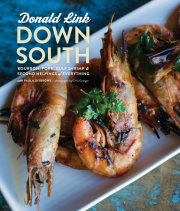 James Beard Award–winning New Orleans chef Donald Link has said, “It’s impossible for me to say which part of the South has the best food, because each place has its own soul,” and in his latest cookbook, DOWN SOUTH: Bourbon, Pork, Gulf Shrimp & Second Helpings of Everything (Clarkson Potter/Publishers; $35.00; on sale February 25, 2014), he unearths true down-home Southern cooking so that everyone can pull up a seat at the table and sample some of the region’s finest flavors.

Link has a knack for sniffing out a backyard barbeque wherever he travels and scoring an invitation to sample some of the best fare around. Jumping into the world of DOWN SOUTH means learning to drink bourbon over only one—maybe two—ice cubes with the grandson of Pappy Van Winkle (don’t you dare mix Coke with it); getting tips from beloved writer Julia Reed on how to entertain folks, including how pecans, not peanuts, should grace the cocktail table because they’re fancier and discovering that the tastiest lamb can be found at a ranch outside of Austin, where it’s roasted slowly over a campfire.

In DOWN SOUTH, Link serves up 110 recipes from regional standouts, including:

With plenty of tall tales, DOWN SOUTH takes home cooks to a region where drinks are slung back, great food is made to be shared, and too many desserts, as it turns out, is just the right amount.

DONALD LINK is the chef-owner of Herbsaint, Cochon, Cochon Butcher, Pêche, and Calcasieu in New Orleans. He won the James Beard Award for Best Chef South in 2007 and his first book, Real Cajun, won the James Beard Award for Best American Cookbook. PAULA DISBROWE is the author of Cowgirl Cuisine and coauthor of Real Cajun and Susan Spicer’s Crescent City Cooking. She lives in Austin, Texas.