THE GREAT QUAKE by Henry Fountain 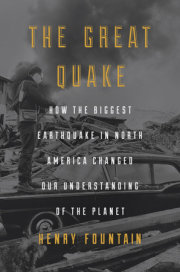 A dramatic narrative by New York Times reporter Henry Fountain explores the human and scientific impact of the biggest recorded earthquake ever to hit North America.

THE GREAT QUAKE brings to life the harrowing
Alaska earthquake of 1964 and its far-reaching effects on the young state, its people, and science.

“Getting out [of his house] when he had had saved his life. But Atwood didn’t have much time to think about that, or about the loss of his worldly possessions. Around him trees were falling over. Worse, the ground itself was starting to break into strange, angular blocks, some rotating up and others down. It was as if swarms of organisms were inside the soil, giving it life.

Suddenly a crevasse opened beneath his feet, and he was falling. To Atwood it seemed that he fell a long distance, and although it was still light out suddenly he was in darkness. But he landed in sand, miraculously soft and dry. He saw that he was in a deep V-shaped chasm, and it was starting to fill up with other objects—tree stumps, fence posts, and boulder-sized chunks of frozen soil. . .”

—From THE GREAT QUAKE

Good Friday, March 27, 1964. Kris Madsen, a young teacher living in the fishing village of Chenega, Alaska, had finished the school day and was moving the chairs around in the one-room schoolhouse for Chenega’s evening movie when a terrifying rumble filled the air and the ground began to shake. Looking out at the bay, she saw that something was startlingly wrong: the water in the cove had disappeared, as if a giant vacuum hose had sucked it dry. Earlier in the afternoon, some of Madsen’s students had gone down to the beach to play, taking advantage of the low tide. They would never be heard from again, swept away by a thirty-foot wall of water that struck while the ground was still shaking.

At the same time, seventy-five miles away in the port of Valdez, the bottom dropped out of the world. A long slice of the seaward edge of the plain that Valdez sat on—a section nearly a mile long and as much as six hundred feet wide—slumped almost instantly into the bay, taking men, women, and children with it. In a matter of a minute or two, twenty-eight people—some of whom never even had a chance to get out of their cars—vanished forever.

Henry Fountain, a veteran reporter for the New York Times, writes about science and frequently covers disasters. As such, he has long been fascinated by the 1964 Alaska earthquake—the biggest ever recorded in North America, and the second-biggest ever in the world—and the pioneering work of George Plafker, the geologist charged with figuring out what had happened.

As the fiftieth anniversary of the event approached, Fountain began researching THE GREAT QUAKE (on sale August 8), spending two months in Alaska, some of that time with Plafker himself, to see with his own eyes the lasting impact the quake had on the land in the hardest-hit areas. He also did extensive interviews with survivors, including Madsen. “More than half a century later, the scars still show on Alaska and its people,” Fountain says. “But the quake left an indelible mark on science as well.”

A compelling account that blends history and science, THE GREAT QUAKE interweaves the stories of the people whose lives were devastated by the Alaska earthquake with Plafker’s geological detective work, which discovered the truth behind how these kinds of mammoth earthquakes occur. In the process, Plafker helped confirm the theory of plate tectonics—what is now a fundamental principle of science. Today, researchers the world over closely study subduction-zone earthquakes like the one Plafker first identified to gauge the likelihood of future catastrophes.

Seismologists know that the duration of an earthquake provides a rough sense of its magnitude. A 1989 earthquake in California that killed sixty-three people and caused six billion dollars’ worth of damage lasted about fifteen seconds and had a magnitude of 6.9. The 9.2 magnitude earthquake in Alaska lasted nearly five minutes—or, as some put it later, an eternity. “The Alaska earthquake changed the lives of all who lived through it,” Fountain says. “Plafker didn’t live through the disaster—he arrived a day later—but in his own way, and just as surely, the quake altered his life, too.”