GOT TO GIVE THE PEOPLE WHAT THEY WANT 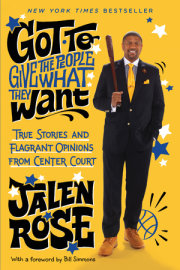 Got to Give the People What They Want

“Jalen has lived the most fascinating life, hands down, of anyone I ever met.”
—From the Foreword by Bill Simmons

Jalen Rose has never been quiet. Not as a kid growing up in Detroit in the 70’s and 80’s. Not as the brash, trash-talking leader of the legendary “Fab Five” at the University of Michigan. Not as the player under the stewardship of Hall of Famers Larry Bird, Isiah Thomas and others throughout his thirteen-year NBA career. And certainly not as a commentator and analyst on ABC/ESPN and Grantland.

In GOT TO GIVE THE PEOPLE WHAT THEY WANT: True Stories and Flagrant Opinions from Center Court (Crown Archetype; October 2015) no topic is off limits.

Jalen shares, for the first time, the full inside story of his long road to stardom. Beginning with his life in Detroit, he talks about discovering he was the son of an NBA All-Star and how he went on to play alongside other future pros at famed Southwestern High School. Moving on the explosion of the “Fab Five” at Michigan, Jalen breaks down the team that took the basketball world by storm, went to two straight title games, and made baggy shorts, black shoes and black socks all the rage in the process. Finally he discusses his NBA career and transition to an ABC/ESPN analyst and the founder of a successful charter school in his hometown.

All along Jalen offers his unfiltered take on some of the most pressing issues facing sports today: the flaws of amateur recruiting, the hypocrisy of the NCAA, the possibility of paying college players, the truth about performance enhancing drugs, and more. He also pulls back the curtain on hidden corners of the basketball world—how trades really get made, player/coach relations, how veterans really run the NBA, how teams really win titles, and, of course, how to trash talk like a pro.

Honest, unfiltered, unbiased. Raw, refreshing, real. This colorful collection of stories and opinions about basketball and life gives people the kind of insight and understanding they won’t get anywhere else in the sports world.

ABOUT THE AUTHOR:
JALEN ROSE is an ABC/ESPN analyst, an executive producer of wildly popular 30 for 30 documentary The Fab Five, the and host of the “Jalen and Jacoby” podcast, and a game-show panelist for To Tell The Truth. Rose began his sports career at the University of Michigan where he reached two NCAA title games, and then went on to play for thirteen years in the NBA, most notably with the Indiana Pacers, who he helped to reach three consecutive Eastern Conference finals and the 2000 NBA Finals. Rose established the Jalen Rose Foundation/Charitable Fund in 2000 to create life-changing opportunities for underserved youth. His most substantial outreach initiative to date is the establishment of the Jalen Rose Leadership Academy, a tuition free public charter high school in his hometown of Detroit.