THE GIRL WHO SMILED BEADS by Clemantine Wamariya and Elizabeth Weil

A Story of War and What Comes After 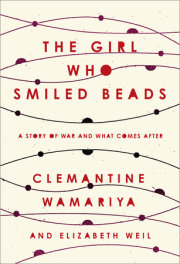 The Girl Who Smiled Beads

THE GIRL WHO SMILED BEADS by Clemantine Wamariya and Elizabeth Weil (on sale April 24) is not the wartime memoir we’ve come to expect. It is a harrowing story, but it also challenges us to see those seeking refuge not just as “victims” to save or to give things to, but as people who can give things to us and expand our world. It is about the saving power of the imagination. It is about forging your own identity when the world seems determined to tell you who you are.

Clemantine Wamariya grew up in a close-knit family in Rwanda, curious and exuberant, eating pineapple cake and playing in her mother’s tropical garden. She adored her nanny, Mukamana, and would beg her to tell her stories. Her favorite was about a beautiful, magical girl who roamed the earth, leaving a trail of beads; Mukamana would begin and then invite Clemantine to imagine what came next, and how it ended. In this way, the fabled girl became a reminder that Clemantine had the power to give shape to the world—which, when Clemantine was six, came to include terrifying noises unlike any she’d ever heard, and expressions on her parents’ faces she’d never seen. As neighbors began to disappear, she and her fifteen-year-old sister, Claire, were sent to stay with their grandparents in the country. One day, their grandmother ordered the two of them to run out the back door. They would run for the next six years, seeking safety in seven African countries.

Devastating yet beautiful, always uncompromising, THE GIRL WHO SMILED BEADS is Clemantine’s account of her childhood and early adult life (she is now thirty). When she was twelve, she and Claire were granted refugee status in the United States; there, in Chicago, their lives diverged. Though their bond remained unbreakable, Claire, who had for so long protected and provided for Clemantine, was a single mother cleaning hotel rooms to support her family, while Clemantine was taken in by a family who raised her as their own. She seemed—at least on the surface—to be living the American dream: attending private school, taking up cheerleading, and, ultimately, graduating from Yale. Along the way, the girls were reunited with their parents—live on the Oprah show—after twelve years apart. Yet the years of being dehumanized, of going hungry and seeing death, could not be erased. She felt at the same time both six years old and one hundred.

Clemantine refuses to allow us to make her a character out of our imaginations or a prisoner of our assumptions. “The word ‘genocide’ cannot tell you, cannot make you feel, the way I felt in Rwanda, the way I felt in Burundi,” she says. “There’s a difference between story and experience. Experience is the whole mess, all that actually happened; a story is the pieces you string together, what you make of it, a guide to your own existence. Experience is the scars on my legs. My story is that they’re proof that I’m alive.”

THE GIRL WHO SMILED BEADS is the profound, powerful expression of Clemantine’s commitment to owning her story and constructing her life on her own terms—her voice brilliantly rendered by coauthor Elizabeth Weil. “In Mukamana’s tale, the girl is truly special, undeniably strong and brave,” says Clemantine. “I wanted to be my own version of that—a girl who had power and agency over her own life. The plot provided by the universe was filled with starvation, war, and rape. I would not—could not—live in that tale.”