THE GATEKEEPERS by Chris Whipple

How the White House Chiefs of Staff Define Every Presidency 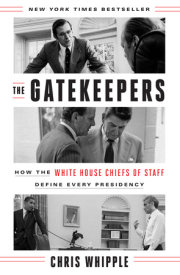 Select Praise for THE GATEKEEPERS and Chris Whipple
“Chris Whipple takes us deep inside one of the most important and demanding jobs in Washington—White House chief of staff.  Here we get to know how great power is managed, and exercised by those who have held the job. If you’re a political junkie or merely curious, this is the book for you.”
—Tom Brokaw

“A vivid, enthralling, and brilliantly reported account of White House chiefs of staff, who are—with all respects to U.S. vice presidents—the actual second-most-powerful people in Washington. This is U.S. history through the fascinating prism of the men who guard the door to the Oval Office, and a learned, welcome, and important addition to the study of the executive branch.”
—Christopher Buckley, author of Thank You for Smoking, No Way to Treat a First Lady, and The Relic Master

“Understanding how government really works, what Presidents actually do, and what is the range of ‘normal’ versus ‘unprecedented’ behavior, is more important now than ever before. As The Gatekeepers makes vividly clear, White House chiefs of staff are at the center of the process that determines how presidents succeed or fail. This is an enlightening work of history with important lessons for our immediate future.”
—James Fallows, The Atlantic, former White House speechwriter

“Chief of Staff is a role of recent vintage—the most powerful job in government never mentioned in the Constitution.  Chris Whipple has done a wonderful job humanizing the crushing nature of the 24/7 job (literally 24/7) in which all credit or blame goes to the President who is served.  This is a book of insights, but so too is it an important manual on how the executive branch of our government functions.”
—Charles Gibson, former anchor, ABC World News Tonight

“Having interviewed all 17 living former chiefs of staff and two former presidents, Whipple offers a scintillating behind-the-scenes look at an office that is all but invisible to the public. This is page-turning catnip for political junkies, who will read it with an eye to what lies in store for Reince Priebus and the Trump administration.”
—Booklist, starred review

“A vibrant narrative of the real-world West Wing…confident and fast-paced…in this page-turner of a history, readers will discover new facets of historical events that they felt they already knew.”
—Publishers Weekly

-Two ambitious chiefs, Donald Rumsfeld and Dick Cheney, brought Gerald Ford back from political disaster to the brink of victory over Jimmy Carter—forging a political alliance between themselves that would take them to the pinnacle of power decades later.

-Jimmy Carter tried to govern without a chief, and thereby crippled his presidency.

-James A. Baker III redefined and mastered the job—making the Reagan Revolution possible.

-George W. Bush’s long-serving chief Andrew Card would be unable to quell the infighting among the president’s feuding advisers. As the decision to invade Iraq loomed, no one was acting effectively as the president’s honest broker.

-Barack Obama’s presidency was profoundly affected by his chiefs of staff. With Rahm Emanuel at the helm, Obama succeeded in staving off another Great Depression, saving the auto industry, and passing his landmark Affordable Care Act. And Emanuel’s successors helped achieve the Paris Climate Accord, the Iran Nuclear Agreement, and the diplomatic opening to Cuba. But Obama’s inability to pass legislation, his failure to get a grand bargain on the budget, and the bungled health-care rollout can be attributed not just to political gridlock, but to his chiefs.