Meals and Moments from a Village in the Vineyards 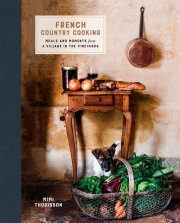 “Francophiles and armchair travelers who loved Dorie Greenspan’s Around My French Table and David Lebovitz’s My Paris Kitchen will gladly add this classic title to their collections.”

“Amid Mrs. Thorisson’s recipes are stories of the home’s past, as told to her by previous owners and village old-timers. Readers will learn tales of multiple generations of cooks together in the French country kitchen.”

Mimi Thorisson takes readers on a trip to the French countryside with delicious recipes, evocative photographs, and charming stories about the history and people who make her quaint village such a special place.

Meals and Moments from a Village in the Vineyards

Readers everywhere fell in love with Mimi Thorisson, her family, and their band of smooth fox terriers through her blog, Manger, and her 2014 debut cookbook, A Kitchen in France. Now, Mimi is releasing her highly anticipated second cookbook, French Country Cooking: Meals and Moments from a Village in the Vineyards (Clarkson Potter | on sale October 25, 2016 | $40.00 | hardcover), a charming jaunt to an untouched corner of France that has thus far eluded the spotlight.

Inspired by the family’s move to a new home, a massive old stone building that once housed a restaurant and an inn, French Country Cooking takes home cooks and armchair travelers alike on a captivating trip to French wine country. The book is filled with 100 simple yet exquisite recipes inspired by the workshops and pop-up restaurant Mimi hosts in her home, as well as by the characters who inhabit their quaint village in the Médoc.

MIMI THORISSON is the author of A Kitchen in France and Manger, a blog devoted to French cooking and her life in the French countryside. She is the host of the French cooking shows La Table de Mimi and Les Desserts de Mimi. She lives with her husband, their children, and a band of smooth fox terriers in an old château in St. Yzans, in the Médoc region of France.  Visit her at www.MimiThorisson.com.

French Country Cooking: Meals and Moments from a Village in the Vineyards