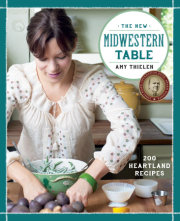 Thielen heralds a fresh take on Midwestern cooking, modernizing and refining the dishes that she grew up with while also unearthing local gems from across the region. In an impassioned voice, she reveals how the Midwest is responsible for much of what we consider our American food heritage, conjuring a cuisine that is generous, thrifty, and resourceful.

With 200 recipes, 150 color photographs, and numerous stories that illuminate the pocket cuisines of the region, THE NEW MIDWESTERN TABLE shines a spotlight on this vibrant regional cuisine.

Beginning September 14th, you can catch Amy delving into all things Midwestern in her new Food Network series, Heartland Table. From her charming cabin kitchen, Amy cooks some of the Heartland’s most delicious and often surprising dishes. Over the course of the six-episode series, she’ll also visit locals home cooks, restaurants, lakeside kitchens, and working farms, highlighting regional traditions and flavors along the way.  Heartland Table premieres on Saturday, September 14, at 10:30 am ET/PT on Food Network.

Amy Thielen is an important new voice on the culinary scene and by following her sure and steady lead, home cooks will fall in love with America’s most captivating local flavors.

AMY THIELEN grew up a few miles from the headwaters of the Mississippi River in northern Minnesota and graduated from Macalester College. She spent seven years cooking professionally in New York under David Bouley, Daniel Boulud, Jean-Georges Vongerichten, and Shea Gallante. Since returning to Minnesota in 2008, she has written for the Minneapolis Star Tribune, Men’s Journal, and Saveur, and won a James Beard Journalism Award in 2011. She lives in the country near Park Rapids, Minnesota, with her husband and their son.