Ten Dollar Dinners: 140 Recipes and Tips to Elevate Simple, Fresh Meals Any Night of the Week 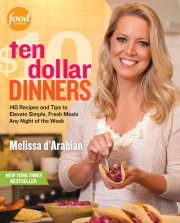 In Melissa d’Arabian’s debut cookbook, Ten Dollar Dinners: 140 Recipes and Tips to Elevate Simple, Fresh Meals Any Night of the Week (Clarkson Potter/Publishers; $24.99; August 14, 2012), the Food Network star provides approachable recipes, smart saving strategies, and practical tips for satisfying meals – all within a larger context of eating well, being a responsible consumer, and spending with purpose. A wife and mother of four young daughters, and winner of The Next Food Network Star, Melissa makes good on her unwavering $10 promise of dinner for four. This ultimate guide to affordable and impressive home cooking will appeal to all readers – even those not on a budget – and leave them pleasantly surprised at just how elegant, plentiful, nutritious and downright delicious budget cooking can be.

Drawing on personal life experiences – growing up on a tight budget, earning her MBA and working in corporate America, and managing her own family’s resources as a stay-at-home and then working parent – Melissa easily relates to home cooks and encourages them to think about cooking in a different way. In Ten Dollar Dinners, Melissa proves that fresh ingredients and sophisticated flavor profiles have a place at the budget-cooking table.

In addition to its 11 chapters filled with fresh recipes and mouthwatering photographs, Ten Dollar Dinners features handy tools and information like guidelines for a robust pantry and clever mix-and-match cost-coding system for countless menu options. Whether trying a clear-the-pantry week, keeping flavor enhancers like bacon or fresh ginger in the freezer, stretching expensive ingredients alongside inexpensive ones, or finding creative uses for leftovers, Melissa provides more than 100 simple yet effective tips for shopping, cooking and ingredient management.

A pro at conjuring flavor and style from common supermarket ingredients, Melissa’s company-worthy recipes are easy enough for a weeknight family meal but also elegant enough for weekend entertaining. Featured recipes include:

BREAKFAST: Baked Huevos Rancheros in Crispy Tortilla Cups; Potato-Bacon Torte (which, at just 50 cents a serving, was one of Melissa’s winning recipes on The Next Food Network Star), Black Bean, Chocolate, and Banana Smoothies

With Ten Dollar Dinners, readers can join Melissa d’Arabian in spending with purpose, cooking with love, and savoring their homemade meals, not to mention saving money in style.

MELISSA D’ARABIAN hosts Food Network’s daytime cooking series Ten Dollar Dinners and Cooking Channel’s lifestyle show Drop 5 lbs with Good Housekeeping. After earning her undergraduate degree at University of Vermont and MBA from Georgetown University, Melissa enjoyed a successful career in finance and strategy before eventually becoming a stay-at-home mom to her four daughters. Eager to share her tried-and-true recipes and tips with today’s diverse families, Melissa competed on and won season five of The Next Food Network Star. She has since appeared on the hit primetime series The Best Thing I Ever Ate, Chopped, and Food Network Challenge. Melissa and her family live just outside San Diego. Visit www.melissadarabian.net, and follow Melissa on Facebook and Twitter (@MelissadArabian).