Secret Service Agents Reveal the Hidden Lives of the Presidents 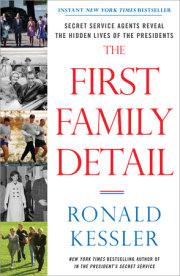 As in a play, presidents, vice presidents, and presidential candidates perform onstage for the public and the media. What the nation’s leaders are really like and what goes on behind the scenes remain hidden. Secret Service agents have a front-row seat on their private lives and those of their wives and children. Crammed with new, headline-making revelations, THE FIRST FAMILY DETAIL: Secret Service Agents Reveal the Hidden Lives of the Presidents (Crown Forum; On Sale August 5, 2014; $26.00) tells that eye-opening, uncensored story.

Since publication of his New York Times bestselling book In the President’s Secret Service, award-winning investigative reporter Ronald Kessler has continued to penetrate the wall of secrecy that surrounds the U.S. Secret Service, breaking the story that Secret Service agents who were to protect President Obama hired prostitutes in Cartagena, Colombia, and revealing that the Secret Service allowed a third uninvited guest to crash a White House state dinner.

Now in this new book, Kessler presents far bigger and more consequential stories about our nation’s leaders and the agency sworn to protect them. Kessler widens his scope to include presidential candidates and former presidents after they leave the White House. In particular, he focuses on first ladies and their children and their relationships with the presidents.

From observing Vice President Joe Biden’s reckless behavior that jeopardizes the country’s safety, to escorting Bill Clinton’s blond mistress at Chappaqua, to overhearing First Lady Michelle Obama’s admonitions to the president, to witnessing President Nixon’s friends bring him a nude stripper, to seeing their own agency take risks that could result in an assassination, Secret Service agents know a secret world that Ronald Kessler exposes in breathtaking detail.

Ronald Kessler is the New York Times bestselling author of The Secrets of the FBI, In the President’s Secret Service, and The CIA at War. A former Wall Street Journal and Washington Post investigative reporter, Kessler has won eighteen journalism awards, including two George Polk awards: one for national reporting and one for community service. He was named a Washingtonian of the Year by Washingtonian magazine. Kessler lives in Potomac, Maryland, with his wife, Pamela Kessler.

The Secrets of the FBI

“Ron Kessler appears to get everything first.”

“I don’t know how the author Ronald Kessler does it, convincing some FBI agents to sing like canaries . . . reads like a spy novel.”

“Ronald Kessler’s new book, The Secrets of the FBI, is a great book that should be read by everyone.”

In the President’s Secret Service

“[A] fascinating exposé . . . high-energy read . . . amusing, saucy, often disturbing anecdotes about the VIPs the Secret Service has protected and still protects . . .  [accounts come] directly from current and retired agents (most identified by name, to Kessler’s credit) . . .  Balancing the sordid tales are the kinder stories of presidential humanity . . . an insightful and entertaining story.”

“Kessler’s such a skilled storyteller, you almost forget this is dead-serious nonfiction. . . . The behind-the-scenes anecdotes are delightful, but Kessler has a bigger point to make, one concerning why the under-appreciated Secret Service deserves better leadership.”

“Rips the lid off the inside world of Secret Service agents and the presidents they protect.”

“Ronald Kessler is a veteran Washington-based investigative journalist on national security. . . . His unparalleled access to top players in America’s counterterrorism campaign allowed him a rare glimpse into their tradecraft, making The Terrorist Watch a riveting account.”

“A very interesting look inside the FBI and CIA . . . unprecedented.”