THE FAR AWAY BROTHERS by Lauren Markham

Two Young Migrants and the Making of an American Life 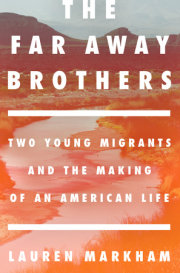 The Far Away Brothers

“Timely and thought-provoking . . . Markham provides a sensitive and eye-opening take on what’s at stake for young immigrants with nowhere else to go.” —Publishers Weekly

“One of the most searing books on illegal immigration since Sonia Nazario’s Enrique’s Journey.” —Kirkus Reviews (starred review)

“This brilliantly reported book goes so deeply into the lives of its protagonists and is so beautifully, movingly written it has some of the pleasures of a novel—but all the force of bitter truth.” —Rebecca Solnit

“Once you’ve read this remarkable reporting, ‘immigration’ will never be an abstract or airless debate for you. It’s hard to imagine a more timely or more valuable volume.”  —Bill McKibben

“Beautifully written, The Far Away Brothers examines the claustrophobic space between grinding poverty and brutal gang violence that drives so many children from El Salvador to make the dangerous journey north. Lauren Markham applies the eye of an artist to the dogged reporting of an investigative journalist. What a fine and timely book!” —Ted Koppel

Lauren Markham has been reporting on undocumented immigration for nearly a decade, but it was not as a journalist that she first met seventeen-year-old Ernesto and Raúl Flores, brothers who had recently emigrated from El Salvador alone. She was working at Oakland International High School, a school for recent immigrants, when the Flores twins walked into her office, scared stiff, having just missed their date in immigration court. That meeting grew into the illuminating and harrowing story she tells in THE FAR AWAY BROTHERS: Two Young Migrants and the Making of an American Life (on sale September 12).

The Flores twins (their names have been changed to protect their anonymity) told Markham they had come to America to flee escalating violence at home, but that left her with many more questions: What were such children really risking—and enduring—to come to the United States? And why were so many coming now? When she started at Oakland International, the school had enrolled a few unaccompanied minors, but they now, after a nationwide surge that has shown no signs of stopping, make up more than a quarter of the school’s student population. What was the likelihood the Flores twins would gain the legal right to stay, and would they really be better off if they did? “Answering those questions became a personal imperative,” says Markham. “The specter of violence down south, the specter of deportation up north, and the mess in between: their worlds were determined by it all.”

To learn more about the Flores family’s story, and that of the hundreds of thousands of migrants like them, Markham spent two years traveling throughout the United States, Mexico, and El Salvador. Her investigation took her to prisons, migrant shelters, deportation hearings, narco territory, border cemeteries, and gang arrests. She also spent countless hours with the Flores twins and their extended family in Oakland and El Salvador, in service of rendering their stories and circumstances with a humane roundness reminiscent of Katherine Boo’s Behind the Beautiful Forevers.

Between them the Flores twins have been touched by robbery, rape, and murder while contending with PTSD, self-harm, teenage pregnancy, unstable living arrangements, and crushing debt to the coyotes who brought them north. Yet as they adjust to American life in the face of unyielding pressure, they also navigate the trials of being teenagers—Ernesto painstakingly picking out the perfect jewelry for his girlfriend at Forever 21, Raúl taking to Facebook to express his frustrations via emojis. It is not only the “wounds of war” their story illustrates, says Markham, but also “the spirit of a new generation of immigrants.”

In the past few years, hundreds of thousands of minors, paperless and parentless, have crossed into the United States. In a time when immigration is too often reduced to a matter of binary politics, THE FAR AWAY BROTHERS seeks to offer a complex understanding of who those children are, the choices they’ve made, and what their stories reveal about our country.