Explore the foodways, people, and places of Appalachia 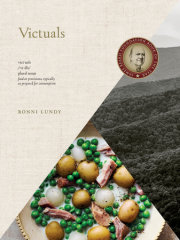 Victuals: An Appalachian Journey, with Recipes

Victuals: An Appalachian Journey, with Recipes (Clarkson Potter| August 30, 2016 | $32.50 | Hardcover) guides us through the surprisingly diverse history – and vibrant present – of food in the Mountain South. While Appalachia is often stereotyped and dismissed as a homogenous place, here, through 80 recipes and stories gathered on her travels in the region, Southern food authority Ronni Lundy provides a deeper look at the region’s complexity, from its wide range of native crops to the people bringing vibrancy to the food landscape.

Sitting at a diverse intersection of cuisines, Appalachia offers a wide range of ingredients and products that can be transformed using traditional methods and contemporary applications. Victuals explores the diverse and complex food scene of the Mountain South through recipes, stories, traditions, and innovations, and with essays that introduce readers to the rich histories and the farmers, curers, hunters, and chefs who define the region’s contemporary landscape. Each chapter explores a specific defining food or tradition of the region; recipes featured include:

With beautifully dramatic photography by Johnny Autry that enhances Ronni’s thorough and entertaining histories of the chefs, farmers, and people who are shaping the region today, Victuals will stand as the source of information on past, present, and future Appalachian foodways.

Born in Corbin, Kentucky, RONNI LUNDY has long chronicled the people of the Southern Appalachians as a journalist and cookbook author. She is the former restaurant reviewer and music critic for The Courier-Journal in Louisville, former editor of Louisville Magazine, and has contributed to many national magazines. Her book Shuck Beans, Stack Cakes and Honest Fried Chicken was recognized by Gourmet magazine as one of six essential books on Southern cooking. In 2009, Lundy received the Southern Foodways Alliance Craig Claiborne Lifetime Achievement Award. She has contributed to Eating Well, Gourmet, Bon Appétit, Esquire, and other magazines.