How a Tight Budget Can Become Your Greatest Competitive Advantage 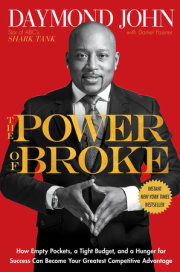 The Power of Broke

“Daymond knows how to make things happen. He knows the difference between a want-repreneur and an entrepreneur, and he lays it out for us in these pages. What a kick it is to read over his shoulder as he shares his hard-won wisdom. This guy built an empire from the streets of Hollis, Queens, and here he compares notes with other visionaries who’ve also found ways to beat the odds and make it to the top. His new book is so inspiring, so insightful, so invigorating… I’m glad that he took the time to share this mindset with the world”
—Mark Cuban, Entrepreneur and Owner of Dallas Mavericks

“Daymond John’s journey proves that desperation breeds innovation, and The Power of Broke breaks it down for us with straight talk from a guy who knows what it takes to make something out of nothing.”
—Steve Case, chairman and CEO of Revolution LLCand cofounder of America Online

“Money can’t buy you strength or spirit. It can’t get you peace or power. In his empowering new book, Daymond John sets out a blueprint for folks looking to put their God-given assets to work to build a business or a brand. Nobody knows better than Daymond that it doesn’t matter how you start out in life – the will to win resides in us all.”
—Russell Simmons , Business Mogul and Philanthropist

“I firmly believe that you should only read business books from people who have actually built businesses. Daymond has done just that, and here he breaks down the thesis and the religion behind exactly how he did it. You have to understand that ‘broke’ isn’t what happens in your wallet; ‘broke’ is a mind-set. It’s about tapping into that state of desperation that leads you to tremendous creativity. I was in the game of broke before I even knew what the game was, and, here, Daymond John deconstructs this crucial concept in detail.”
—Gary Vaynerchuk, VaynerMedia CEO and three-time New York Times bestselling author

Daymond John has been practicing the Power of Broke ever since he started selling his home-sewn hats on the streets of Queens. With no funding and a $40 budget, Daymond had to engineer out-of-the-box solutions to take his product to the masses. This do-or-die creative campaign not only saved his business, it launched the FUBU brand into a $6 billion global phenomenon. But it might not have happened if he hadn’t started out broke—with nothing but a heart full of hope and a ferocious drive to succeed by any means possible. Today, Daymond stars on the hit ABC-TV series Shark Tank, is one of corporate America’s leading brand consultants, and is currently working to help small businesses all over the globe with his recent appointment by President Barack Obama as a Presidential Ambassador for Global Entrepreneurship.

Daymond John unveils the secrets to his success in his new book, THE POWER OF BROKE: HOW EMPTY POCKETS, A TIGHT BUDGET, AND A HUNGER FOR SUCCESS CAN BECOME YOUR GREATEST COMPETITIVE ADVANTAGE. The FUBU founder and star of ABC’s Shark Tank shows how starting a business from broke forces you to think more creatively, use your resources more efficiently, connect with your customers more authentically, and market your ideas more imaginatively.

Drawing on his own experiences as an entrepreneur and branding consultant, behind the scenes peeks from the set of ABC TV’s Shark Tank and stories from dozens of other entrepreneurs, Daymond shows how we can all leverage the power of broke to phenomenal success. In the book you’ll meet:

• Steve Aoki, the electronic dance music deejay who managed to parlay a series of $100 gigs into an international phenomenon that redefined the music industry.
• Gigi Butler, a cleaning woman from Nashville who built a cupcake empire on the back of a family recipe, her maxed out credit cards, and a heaping dose of faith.
• Mo Bridges, an eleven-year-old Shark Tank entrepreneur who stitched together a winning clothing line with just his grandma’s sewing machine, a stash of loose fabric, and his unique sartorial flair.

When your bank account is empty and creativity and passion are the only resources you can afford, success is your only option. As Daymond says, “It takes having your back against the wall, leveraging your last dollar, and having no place to go but up, up, up” to harness the power of broke. Watch Daymond John in his interview with Good Morning America host George Stephanopoulos expose the long held belief that “you need money to make money” as myth:

DAYMOND JOHN is CEO and founder of FUBU, a much-celebrated global lifestyle brand with more than $6 billion in sales. As one of the stars of ABC’s Shark Tank, he is one of the country’s most visible and respected entrepreneurs. He is the recipient of more than thirty-five awards, including the Brandweek Marketer of the Year and Ernst & Young’s Master Entrepreneur of the Year. As CEO of the marketing firm Shark Branding, Daymond stands on that same cutting edge as one of corporate America’s leading branding consultants. He is also author of two bestselling books, Display of Power and The Brand Within. For more information check out www.DaymondJohn.com.