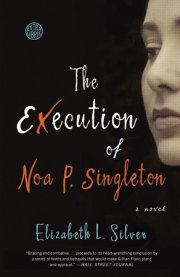 The Execution of Noa P. Singleton

“In this grippingly off-kilter thriller, a young woman sits on death row after being convicted of murder until a high-powered attorney—the victim’s mother—intervenes, leaving everyone to wonder why.”

“[A] searing debut…This devastating read stands less as a polemic against the death penalty than as a heartbreaking brief for the preciousness of life.”

“Silver has written a darkly witty, acerbic jigsaw puzzle of a first novel about legal versus moral culpability…[and] explores convolutions of guilt and innocence beyond the law’s narrow scope with a sharpness and attention to detail that can be unnerving but demands attention.”

“A clever examination of the nature of destiny and the choices we make, this thought-provoking book is reminiscent of John Grisham’s The Confession in its exploration of the death penalty. Silver has successfully written a suspenseful, absorbing tale.”

“Vividly written debut novel…Silver definitely delivers a thought-provoking examination of the criminal-justice system, providing a clear-eyed view of the artificial theatrics that dominate criminal trials and a heartfelt look at both grief and remorse. An intriguing debut from a writer to watch.”

“The Execution of Noa P. Singleton is mortal war between ferocious women, told with a fiery and merciless lyricism so beautiful it hurts.”

“The Execution of Noa P. Singleton is an intense and gripping novel of betrayal and guilt that forces readers to confront their convictions and the limitations of their capacity for empathy. Elizabeth L. Silver is a gifted new writer, and her novel is certain to be a smash.”

“In The Execution of Noa P. Singleton, Elizabeth L. Silver puts the human factor front and center, to devastating effect.  Guilt and innocence, capital punishment, the living hell of death row, all these get their due, but at the heart of it is us, the ongoing mystery of what lies inside our souls.”

“The Execution of Noa P. Singleton kept me awake long after I had put it down. Halfway through this gripping novel, in which ‘good’ and ‘bad,’ ‘guilt’ and ‘innocence’ change positions more than once, I thought I was so clever I might know where this story was headed. But I was proved wrong in a way I never could have imagined. Congratulations to Elizabeth L. Silver for a fantastic first book that will keep readers awake all over the world.”

—Herman Koch, author of The Dinner

“Smart, cool, articulate, funny, and savvy—Noa P. Singleton dares you to put her story down.”
—Rosamund Lupton, author of Sister

“Elizabeth L. Silver is a writer to watch out for, one of great scope and passion. Here she tackles a bold topic with skill, compassion and verve.”

THE EXECUTION OF NOA P. SINGLETON: A Novel by astounding new voice Elizabeth L. Silver (Broadway Books; April 1, 2014) is a clever, gripping and psychologically astute debut about a young woman on death row, what she did to get there, and why she may never share the truth with a living soul.

THE EXECUTION OF NOA P. SINGLETON begins with Noa’s imminent death in a Pennsylvania penitentiary.  Incarcerated at the age of twenty-five for the murder of Sarah Dixon, and having served ten years with little hope for appeal, Noa is ready to die.  Yet six months before her execution date, she has an unexpected visitor in high-powered attorney, Marlene Dixon.  Marlene, the mother of Noa’s victim, has initiated a clemency petition on Noa’s behalf despite asking the judge for the death penalty during the trial.  But why would Marlene change her mind, and what does she want from Noa? As Noa’s tale unfolds, we learn about the events leading up to Sarah’s death, as well as the links binding Noa, Sarah, and Marlene’s fates.  Interspersed throughout the novel are Marlene’s confessional letters to her daughter that reveal clues exposing a past filled with love, anguish, and deception. But whose story is sincere? As Noa’s execution date looms large, we are faced with truths just as sinister as the crime of which she has been accused. While the novel dissects the ethical and legal maze behind the death penalty, THE EXECUTION OF NOA P. SINGLETON is ultimately a character-driven story about two women whose lives are inextricably linked. As their motivations become increasingly nebulous, both women must accept that they are in fact a blurred spectrum of good and evil, and as readers, we are privy to a voyeuristic glimpse into the nuanced psyche of guilt as it impacts every person in the book.

THE EXECUTION OF NOA P. SINGLETON is a fierce and haunting first novel that will leave you thinking about crime and punishment long after you’ve read the final page. Silver, a writer, attorney, and former English teacher, is a graduate of the University of Pennsylvania, the MA Program in Creative Writing from the University of East Anglia in England, and Temple University Beasley School of Law. She studied capital punishment at the University of Texas School of Law at Austin, where she worked on a clemency petition, and later worked as a Judicial Clerk for the Texas Court of Criminal Appeals. As part of the clemency investigation, she visited Texas’s death row, interviewed inmates and met with victim family members.  While exploring the provocative and polarizing issues of the death penalty, Silver wanted to present both sides of the issue, and thus her novel was born. Silver’s taut writing, which has brought recognition from Glimmer Train, Fish Publishing International, The Millions, and Huffington Post, funding from the NEA, and writing residencies in Spain, France, and New York, carries the reader forward to the story’s shocking end.