A haunting and powerful novel that blends literary depth with fantastical elements to tell a story of loss, dreams, and fate, by a star of self-publishing. 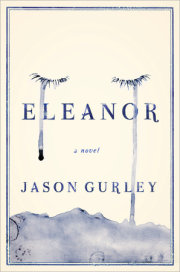 “[An] elaborate mix of ghost story, time travel, and dream worlds….Readers will keep turning the pages to see how it all ends up.”
—Booklist

“A virtuoso performance….Eleanor might just be the book of the year.”
—Russell Blake, bestselling author of the Jet series

“An ambitious book of many wonders…by turns worldly and heartbreakingly true.”
—Elizabeth Collison, author of Some Other Town

“Eleanor is deep—a really poignant, moving story that will surprise you with how smart it is.  The novel turns a traditional tragic narrative on its head with compelling elements of science fiction and fantasy.  It’s a touching story that sneaks up on you, working on multiple levels that pay off in a series of emotional uppercuts in the final pages.  Read it and weep.”
—Daniel H. Wilson, bestselling author of Robopocalypse

Jason Gurley’s ELEANOR (Crown Publishers; on sale January 12, 2016) is an explosive dive into the fragile dynamics of a grieving family in the wake of tragedy. Written over the course of more than ten years and originally self-published to incredible praise, this profound story bends not only the familial roles that we are assigned, but also the lines between dimensions and the universe. Gurley’s fantastical novel shows that healing can come in unique and unexpected ways.

The first time it happens, Eleanor is at school, rushing through the cafeteria doors so her peers don’t see her break down. The pain of her twin Esmerelda’s tragic death, her mother’s anger and alcoholism, her father’s distance—sometimes it’s too much to bear. But as she passes through the doors something changes: a magnetic force, a sharp smell, and a sizzle in the air. She is no longer in the cafeteria but somewhere else entirely. How did she end up in the middle of a green meadow? Her clothes are different and her hair is longer, and the two children joyously playing in the distance look awfully familiar. Why can’t they hear her as she approaches? Do they see her? Is she even there? Before she can make sense of her surroundings, she finds herself back in school, its halls now empty in the dead of night.

The next time Eleanor is pulled out of her reality, it is not so pleasant, nor is the next time. Soon she disappears for longer and longer periods of time, leaving behind frightened loved ones and returning bruised and battered. It isn’t until one fateful day, when she is torn from her world altogether, that she learns where it is she is being pulled to and why. Now, unless Eleanor can master her extraordinary new abilities, Esmerelda’s death will not be the only tragedy to stain her family history.

Much more than a touching family drama, Gurley’s novel transports readers as it follows Eleanor on a unique and poignant journey that crosses worlds and dimensions. Amid her heartache, Eleanor discovers something powerful within herself and must learn how to use her new abilities to fix her broken family. This beautiful novel is sure to draw comparisons to writers such as Neil Gaiman and Audrey Niffenegger.

ELEANOR is at once a delicately woven meditation on the depth of damage wrought by grief, a beautiful coming-of-age tale, and a heartening exploration of the healing power of family and friendship. Gurley’s is indeed a striking new novel.

ABOUT THE AUTHOR:
JASON GURLEY is the author of Greatfall, The Man Who Ended the World, and the fiction collection Deep Breath Hold Tight, among other works. His stories have appeared in the anthologies Loosed Upon the World and Help Fund My Robot Army!!! He was raised in Alaska and Texas and now lives and writes in Portland, Oregon. Visit his website at www.jasongurley.com or follow him on Twitter at @jgurley.