By Helen You with Max Falkowitz 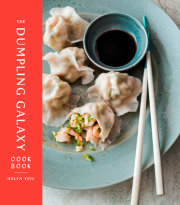 “Helen You is a kind of genius for creating miniature worlds of flavor.”

For the past few years, adventurous eaters have been traveling to Flushing, Queens, for some of the best dumplings in the city. Now they can make them at home with The Dumpling Galaxy Cookbook (Clarkson Potter; $19.99; On sale date: 1/17/17) which features 60 recipes for classic and unexpected fillings and dim sum sides.

When Helen first began making dumplings in a small underground food stall, her menu featured just a few flavors inspired by those she grew up making in her home town of Tianjin, China. That menu continued to expand as she played with new ingredients she could find in American markets. Now The Dumpling Galaxy Cookbook shares the inspiration behind recipes like Sichuan Pepper Lamb and Green Squash; Spicy Beef; Shrimp, Egg, and Asparagus; and even desserts such as Pumpkin and Black Sesame Tang Yuan.

With co-writer Max Falkowitz, Helen guides readers on how to fold an easy-to-make dough; choose your spices and other ingredients; and boil, steam, or pan-fry just about any dumpling imaginable. With a little practice, you’ll soon be using The Dumpling Galaxy Cookbook as a launch pad for developing your own galaxy of fillings.

HELEN YOU is the chef and owner of Dumpling Galaxy in Flushing, Queens, which started as the Tianjin Dumpling House, a stall in the Golden Shopping Mall basement food court. Helen and her dumplings have been lauded in New York magazine, Serious Eats, Eater, and the New York Times, which named Dumpling Galaxy a Critics’ Pick and awarded it one star.

A native of Queens, MAX FALKOWITZ grew up hunting dumplings and dosas. He is the executive digital editor of Saveur and was previously the senior features editor for Serious Eats.