Part travelogue, part food history, and part celebration of culinary delight, The Whole Fromage will delight readers of delicious travel narratives like French Lessons and The Sweet Life in Paris. 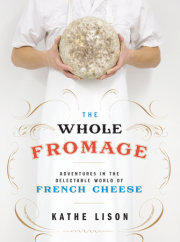 The Whole Fromage: Adventures in the Delectable World of French Cheese

Select Praise for The Whole Fromage:

“An inquisitive romp across France . . . Rich in storytelling, the book journeys between the historic past and the delicious present in one of the world’s most diverse cheese realms. Pick up a copy of The Whole Fromage, and get lost in it.” —Culture

“A lot of books have been published about the history, culture, and virtues of France’s cheeses, but this one celebrates the farmers, dairymen, and cheesemakers who have established France’s cheeses as still the world’s standard.” —Booklist

“Whether Lison is ruminating on the short lactation cycle of sheep, the origins of rennet, or the grassy, lemony taste of a spring goat cheese, readers will have all their senses engaged.” —Kirkus

“There are no machines that can do this,” explains Claude Querry, head caviste at St. Antoine, a French cheese “cathedral” dedicated to aging Comté, as he taps rounds of huge mountain cheese with a sonde, “cheese iron,” to determine which are ripe and which should be allowed to continue to age. To Kathe Lison, whose love of French cheese began with mild, white, processed Babybel, the art of aging traditional French fromage seems akin to conjuring. Growing up in Wisconsin,“America’s Dairyland,” as the descendent of a great-great-grandfather who owned a dairy, Lison adored cheese, but it wasn’t until she traveled to Paris that she discovered the incredible diversity of French fromage. Part travelogue, part food history, and part celebration of culinary delight, THE WHOLE FROMAGE: Adventures in the Delectable World of French Cheese (Broadway Books; June 25, 2013) follows Lison’s journey through France as she unearths the artisan culture of French cheese.

In THE WHOLE FROMAGE, Lison travels from the last cheesemaking burons in the pastures of Auvergne and the Abbaye de Tamié, where monk-made Tamié ages in caves beneath the cloisters, through the hills of Normandy and to the headquarters of Isigny Sainte-Mère, where the decision to stop making Camembert with raw untreated milk ignited such furor that A True Camembert Defense Committee sprang into existence. As she tracks down cheesemakers whose lifestyles and philosophies are as varied and flavorful as the delicacies they produce and meets head on the polemics of self-appointed defenders of traditional French cheese, Lison’s narrative becomes as much an incisive examination of French heritage and tradition as it is an intimate (and mouthwatering) introduction to French cheese.

As evocative of the French landscape through which Lison travels as the creamy, crumbly, buttery, pungent fromages she encounters, THE WHOLE FROMAGE will surely delight readers of  travel narratives like French Lessons and The Sweet Life in Paris.

ABOUT THE AUTHOR: A native of Wisconsin, “America’s Dairyland,” KATHE LISON is an award-winning essayist whose work has appeared in numerous literary journals and won an Emerging Artist Grant from the Utah Arts Council. She lives in Arizona.