In Memory of Bread by Paul Graham 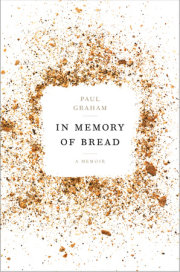 Paul Graham presents a deeply personal and inspiring memoir for anyone who has experienced a life-changing personal setback—and for readers who are interested in the complicated state of our food system today.

IN MEMORY OF BREAD

At age thirty-six, English professor Paul Graham was an aspiring gourmand: he was a dedicated cook, avid home brewer, food writer, and advocate for local eating. He dreamed of exploring countries across the globe through their iconic dishes and drinks: tagliatelle in Italy, baguettes in France, ramen in Japan, beer in Germany. All of that changed when he was diagnosed with celiac disease. The cure was suspiciously simple. He was told to stop eating bread, and wheat and gluten in every other form—a heartbreaking directive, to be sure, for a food-lover like Paul.

In Memory of Bread: A Memoir (Clarkson Potter; June 7, 2016; $26.00; hardcover) is his deeply personal account of the emotional and physical struggles of a bread-baking, wheat-loving guy who suffers a severe illness as a result of an undiagnosed wheat allergy; how he copes with the loss of these staples; and what he discovers about modern industrialized wheat. Graham uses his own losses and gains in the kitchen, as well as others’, to frame the complex history of why wheat in general and bread in particular haunts us, how eaters respond to its disappearance, and why he and so many others may have become allergic to wheat, barley, rye, oats, and other dietary staples.

These days, everyone knows at least one person with a wheat intolerance or sensitivity. Written by a fellow survivor who also loves food and mourns the loss of his former life—by someone who gets it—this is the empathetic, moving, surprising, informative, and at times humorous perspective that will help sufferers move forward with their lives. With In Memory of Bread, Graham beautifully weaves together his personal loss with the realities of modern agriculture, creating a touching narrative for anyone who has experienced a life-changing personal setback.

PAUL GRAHAM is an associate professor of English at St. Lawrence University in upstate New York, and his essays have appeared twice in the Best Food Writing anthology (2012 and 2013). Graham lives with his wife and German shepherd in rural New York, near the Canadian border.

IN MEMORY OF BREAD