The debut cookbook from the beloved Big Gay Ice Cream, delivered in a unique and over-the-top fun yearbook style that takes you deep into the methods of their madly delicious ice cream, sundaes, and dreamy toppings and concoctions. 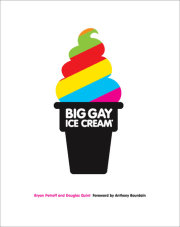 Big Gay Ice Cream: Saucy Stories & Frozen Treats: Going All the Way with Ice Cream (Clarkson Potter; $25.00; on sale April 28, 2015) is the highly anticipated debut cookbook from Big Gay Ice Cream, one of the most popular and critically acclaimed ice cream companies in the United States.

Instead of tackling the tricky trappings of ice cream making from the get-go, Big Gay Ice Cream turns the traditional format of ice cream books on its head. Big Gay Ice Cream is a four-year journey delivered in a unique high school yearbook style, taking you from easy freshman year mix-ins to sophomore year toppings, junior year sundaes and shakes, and finally, senior year recipes for homemade ice creams and sorbets—all with plenty of outrageous stories, cheeky humor, vibrant photography and illustrations, and plenty of culinary and celebrity cameos along the way (including an introduction by Headmaster Anthony Bourdain).

Sophomore Year: Dress Up Your Ice Cream with Homemade Toppings and Sauces

BRYAN PETROFF and DOUGLAS QUINT are the founders and owners of Big Gay Ice Cream, voted one of the best ice cream shops in the world. They debuted as a food truck in June 2009 and have since expanded to two storefronts in New York, with more opening soon in Los Angeles and Philadelphia. The award-winning duo has been featured on countless websites and in publications, as well as on network and cable television and radio programs. Bryan and Doug can be found on either coast and at biggayicecream.com.