THE MOST DANGEROUS BRANCH by David A. Kaplan

Inside the Supreme Court's Assault on the Constitution 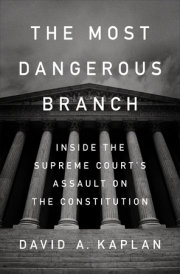 The Most Dangerous Branch: Inside the Supreme Court's Assault on the Constitution

**UP-TO-DATE THROUGH THE NOMINATION OF JUDGE BRETT KAVANAUGH**

**BASED ON INTERVIEWS WITH A MAJORITY OF THE JUSTICES**

IN A REVEALING PORTRAIT OF THE SUPREME COURT,
IN THE TRADITON OF THE BRETHREN AND THE NINE,
DAVID A. KAPLAN TAKES US INSIDE THE SECRET WORLD OF THE JUSTICES

Select Praise for THE MOST DANGEROUS BRANCH:

“If Brett Kavanaugh’s Supreme Court confirmation hearings have inspired you to dig deeper into the intricacies of the nation’s highest court, look no further than a new book devoted to the subject…Kaplan writes in an engaging fashion throughout this detailed book…The Most Dangerous Branch: Inside the Supreme Court’s Assault on the Constitution couldn’t be better.”
—Associated Press

“Describe(s) the behind the scenes dealing that led to the appointment of the sitting Supreme Court . . . Presented at a level of granularity with which you may not be familiar. It makes for engaging, if not reassuring, reading.”
—NPR.org

“’The Most Dangerous Branch’ relies on an astonishing number of sources—beginning with the Supreme Court justices themselves…Kaplan’s critique of judicial power will resonate with the court’s critics on both right and left.”
—The Wall Street Journal

“An important and fascinating look at the Court during one of its most important, and divisive, eras.”
—The Christian Science Monitor

“The Most Dangerous Branch tells the story, in a compelling way, of the ‘triumphalism’ of the justices, both liberal and conservative. It warns against the increasing power of what was supposed to be the least dangerous branch—nine unelected judges who allocate to themselves decision-making authority over issues that should be left to the elected branches. Read it and start worrying.”
—ALAN DERSHOWITZ, professor emeritus at Harvard Law School

“David Kaplan has an inquiring mind and a lively style. He also has some incredible sources inside the Court who have helped him open a window on the inner workings of the most opaque branch of our government. At a moment when the Court’s future hangs in the balance because of the retirement of Justice Kennedy, this book is important, even urgent (and has plenty of dish, too).”
—DANIEL OKRENT, author of Last Call: The Rise and Fall of Prohibition

This is the book about the Supreme Court, at the perfect time. We’ve moved up publication because of Justice Anthony Kennedy’s retirement and the confirmation hearings for Brett Kavanaugh.

Never before has the Court been more central in American life. It is the justices, rather than Congress or other elected officials, who decide the most controversial issues of our time—from abortion and gay marriage to campaign finance, gun control, and voting rights. Time and again, the justices intervene simply because they can, subverting self-government in the process. An arrogant Court enfeebles Congress, diminishes the value of politics, and corrupts confirmation hearings. The next justice will hold sway for a generation over much of our lives. Is such power really what we want to invest in a single unelected, unaccountable individual?

In THE MOST DANGEROUS BRANCH: Inside the Supreme Court’s Assault on the Constitution (Crown; on sale September 4, 2018), David A. Kaplan, the former legal affairs editor of Newsweek, argues it should not be.

Based on interviews with the justices and their clerks, Kaplan offers remarkable details about life behind the scenes at the Court. We discover what happened in the first Obamacare ruling and what the chief justice thinks about his conservative critics. We see Neil Gorsuch’s discordant ways, Ruth Bader Ginsburg’s celebrity, Clarence Thomas’s fury, and what happened at the Texas ranch where Antonin Scalia died. In a sweeping historical narrative, THE MOST DANGEROUS BRANCH combines ambitious reporting and keen analysis—complete through the 2017–18 term—for an absorbing, original look at the least understood branch of government.

At a key moment for the nation, Kaplan challenges conventional wisdom about the Court’s vast power. The problem is not merely that the justices sometimes act as rank partisans—it’s that we’ve come to accept their dominion. Liberals and conservatives alike make that mistake. THE MOST DANGEROUS BRANCH will rile them both.

About the Author:
DAVID A. KAPLAN is the former legal affairs of Newsweek, where he covered the Court for a decade. His other books include The Silicon Boys (a New York Times bestseller that was translated into six languages), The Accidental President (an account of the 2000 election on which HBO’s Recount was partially based), and Mine’s Bigger (a biography of the largest sailboat in the world that won the Loeb Award for Best Business Book of 2008). A graduate of Cornell and the New York University School of Law, he teaches courses in journalism and ethics at NYU. He and his family live in Irvington-on-Hudson, New York.

THE MOST DANGEROUS BRANCH
Inside the Supreme Court’s Assault on the Constitution
by David A. Kaplan
Crown • On Sale: September 4, 2018 • Price: $30.00 hardcover • Pages: 464
ISBN 978-1-5247-5990-2
Also available as an ebook and on audio
Visit crownpublishing.com
You can find the author on twitter @dkaplan007
For more information, including a list of events, visit davidakaplan.com