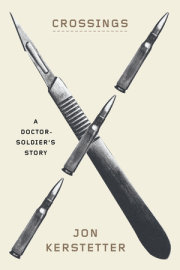 “What is of greatest value in this narrative is Kerstetter’s ongoing, twofold recovery from a stroke on one hand and PTSD on the other…The author’s medical perspective on his own condition and critical therapeutic moments adds depth to an already solid story. An inspiring memoir that will be highly useful to readers struggling with PTSD and other wartime injuries.”

As a child living on an Indian reservation, Jon Kerstetter knew the meaning of boundaries. Driven by a desire to break free of society’s expectations, he pushed to graduate from college and earn advance degrees in business and, at the age of thirty-seven, medicine. Those were just the first among the many improbable and dramatic transitions Kerstetter has made in his life. In CROSSINGS: A Doctor-Soldier’s Story (on sale September 5), he writes beautifully and thoughtfully about his exceptional life of transformations: from civilian to doctor to soldier, trained to heal yet trained to kill, and having to prioritize both roles in war, sometimes in the span of minutes; from doctor and soldier to stroke victim; and, eventually, from stroke patient to writer.

“Bold and risky crossings have shaped my life,” says Kerstetter. “I have always felt an unrelenting need to become something more than I had been. One crossing always led to another. Like learning, there was never a final crossing or a final lesson, only a continuum of discovery and becoming.”

Unfulfilled by his business career, Kerstetter enrolled in medical school at thirty-four to pursue his long-held dream of becoming a doctor. After graduating, he practiced emergency medicine, but was soon frustrated by the many mundane cases that passed through his ER. “Managing critical patients was my gift, and I loved it,” writes Kerstetter. “But practicing civilian emergency medicine had become stale and predictable. Military doctors were a rare breed of doctor, and that’s what I wanted to be.” Despite the fact that, at forty-two, he was older than the maximum age for commissioning, Kerstetter was given an age waiver and accepted into the Iowa Army National Guard, eventually becoming a flight surgeon. His thirst for intensity led him to volunteer in war-torn Rwanda, Kosovo, and Bosnia. His military experienced culminated in three tours in Iraq at the height of the fighting. Those experiences, recounted in vivid detail in CROSSINGS, offer a bracing, unprecedented evocation of a doctor’s life at war. “It’s natural and unnatural to know as much about killing as healing, to listen for the sounds of bullets in one moment, then listen for the sounds of the wounded in the next,” says Kerstetter. “In the end, all that matters is just one thing: breathing like a soldier in one breath, then breathing like a doctor in the next. War–Medicine. Inhale—exhale.”

At the peak of his military and medical career, Kerstetter had a stroke; within hours, his life as a soldier and physician was over. Left with serious cognitive and physical disabilities compounded by PTSD and excruciating pain, he began his painstaking, years-long recovery efforts, the intimate details of which he shares in CROSSINGS. “While the physical struggle was immense, even more soul-crushing was the complete loss of my identity,” says Kerstetter. “What was I if not a soldier and doctor? I felt I would have been better off dying in Iraq.” At a loss to come up with vocational rehab appropriate for Kerstetter’s background, his neuropsychologist suggested he try an experimental therapy: writing about his medical and war experiences as a way to help him order his thinking, reform vital brain connections, and, ultimately, heal.

As part of the approach, Kerstetter enrolled in a distance education program for a two year MFA in creative nonfiction; his master’s thesis became the initial framework of CROSSINGS. In the years since, he has tirelessly refined and reworked and revised. Persistent cognitive deficits from his stroke typically force him to write more than a hundred drafts of a chapter to make sure it says what he wants it to say.

“Through writing, I have been able to accomplish exactly what I set out to do as a child: break the boundaries that tried to define me,” Kerstetter says. “I’ve learned that my life is not so much the product of circumstances or limits, but the collective effort of pushing through the circumstances and lines that defy crossing.”