Stuxnet and the Launch of the World's First Digital Weapon 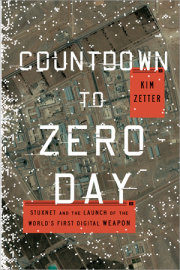 Early Praise for COUNTDOWN TO ZERO DAY:
“Unpacks this complex issue with the panache of a spy thriller. . . Even readers who can’t tell a PLC from an iPad will learn much from Zetter’s accessible, expertly crafted account.”
—Publishers Weekly (starred review)

“A true techno-whodunit [that] offers a sharp account of past mischief and a glimpse of things to come
. . .Zetter writes lucidly about mind-numbingly technical matters, reveling in the geekery of malware and espionage, and she takes the narrative down some dark electronic corridors.” —Kirkus Reviews

In January 2010, inspectors with the International Atomic Energy Agency noticed that centrifuges at a uranium enrichment plant in Iran were failing and being replaced at an unprecedented rate. The cause of their failure was a complete mystery—apparently as much to the Iranian technicians who were replacing them as to the inspectors observing them. Then, five months later, a seemingly unrelated event occurred. A computer security firm in Belarus was called in to troubleshoot some computers in Iran that were caught in a reboot loop—crashing and rebooting repeatedly. At first, technicians with the firm believed the malicious code they found on the machines was a simple, routine piece of malware. But as they and other experts around the world investigated, they discovered a virus of unparalleled complexity and mysterious provenance and intent. They had, they soon learned, stumbled upon the world’s first digital weapon.

Stuxnet, as it came to be known, was unlike any other virus or worm built before: It was the first that reached beyond the computers it targeted to physically destroy the equipment those computers controlled. It was an ingenious attack, jointly engineered by the United States and Israel, that worked exactly as planned, until the rebooting machines gave it all away. But the discovery of Stuxnet was just the beginning: Once the digital weapon was uncovered and deciphered, it provided clues to other tools lurking in the wild. Soon, security experts found and exposed not one but three highly sophisticated digital spy tools that came from the same labs that created Stuxnet. The discoveries gave the world its first look at the scope and sophistication of nation-state surveillance and warfare in the digital age.

Kim Zetter, a senior reporter at Wired who has covered hackers and computer securitysince 1999, was among the first reporters to cover Stuxnet after its discovery and has authored many of the most comprehensive articles about it. In COUNTDOWN TO ZERO DAY: Stuxnet and the Launch of the World’s First Digital Weapon (Crown; on sale November 11, 2014), Zetter
delves into the riveting tale behind Stuxnet’s planning, execution, and unlikely discovery, from its genesis in the corridors of George W. Bush’s White House to its unleashing on machines in Iran and its untimely disassembly by the security geeks who unwittingly dismantled a multimillion-dollar sabotage campaign. She shows in detail how the code was designed and unleashed and how its use ushered in an age of digital warfare in which any country’s infrastructure—power grids, nuclear plants, oil pipelines, dams—is vulnerable to the same kind of attack, with potentially devastating results. A sophisticated digital strike on portions of the power grid, for example, could plunge half of the United States into darkness for weeks or longer, having a domino effect on all other critical infrastructures dependent on electricity.

Ultimately, COUNTDOWN TO ZERO DAY is not just the story of Stuxnet; it’s the story of how the attackers who unleashed the digital weapon opened a Pandora’s box, launching an era in which hackers—state-sponsored and otherwise—now command destructive capabilities that are equal to those of any physical army.
* * * * *

ABOUT THE AUTHOR:
KIM ZETTER is an award-winning journalist who covers cybercrime, civil liberties, privacy, and security for Wired. Zetter has broken numerous stories over the years on WikiLeaks, NSA surveillance, and the hacker underground, which she has discussed on CNN, MSNBC, BBC, NPR’s All Things Considered, and PBS’s Frontline and NewsHour.