Now in paperback: The Psychopath Whisperer by Kent A. Kiehl, PhD 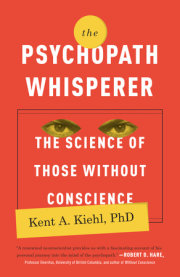 The Psychopath Whisperer provides a compelling journey into the science and behavior of psychopaths, written by the leading scientist in the field of criminal psychopathy.

We know of psychopaths from chilling headlines and stories in the news and movies—from Ted Bundy and John Wayne Gacy to Hannibal Lecter and Dexter Morgan. As Dr. Kent Kiehl shows, psychopaths can be identified by a checklist of symptoms that includes pathological lying; lack of empathy, guilt, and remorse; grandiose sense of self-worth; manipulation; and failure to accept one’s actions. But why do psychopaths behave the way they do? Is it the result of their environment—how they were raised—or is there a genetic compo­nent to their lack of conscience?

This is the question Kiehl, a protégé of famed psychopath researcher Dr. Robert Hare, was deter­mined to answer as he began his career twenty years ago. To aid in his quest to unravel the psy­chopathic mind, Kiehl created the first mobile functional MRI scanner to study psychopaths in prison populations. The brains of more than five hundred psychopaths and three thousand other offenders have been scanned by Kiehl’s labora­tory—the world’s largest forensic neuroscience repository of its kind. In The Psychopath Whisperer, Kiehl describes in fascinating detail his years working with psy­chopaths and studying their thought processes—from the remorseless serial killers he meets with behind bars to children whose behavior and per­sonality traits exhibit the early warning signs of psychopathy. He also shows us the key brain structures that correspond with emotional engagement and how psychopaths’ reactions are diminished, offering new clues to how to predict and treat the disorder.

A compelling narrative of cutting-edge science, The Psychopath Whisperer will open your eyes on a fascinating but little understood world, with startling implications for society, the law, and our personal lives.

About the author: KENT A. KIEHL, PhD, is an executive science offi­cer of the nonprofit Mind Research Network and a professor of psychology, neurosciences, and law at the University of New Mexico. In addition to authoring more than 130 articles in peer-reviewed publications, Kiehl has writ­ten for Scientific American, has appeared on NPR, and was profiled by John Seabrook in The New Yorker. He currently directs five major NIH-funded projects in psychopathy and related mental illnesses. He lectures extensively to state and federal judges, lawyers, cor­rectional officials, and lay audiences about the inter­section of neuroscience and the law.

Praise for The Psychopath Whisperer

“A lucid and closely observed portrait of what psychopaths are actually like, with their chilling combination of moral apathy and charm, by one of the leading researchers and innovators in the field. A fascinating and terrifying book, and a potential life saver.” —John Seabrook, The New Yorker

“A world-renowned researcher of psychopaths delves into the origins of their behavior, especially as it relates to the inner workings of the brain . . . [and] navigates these issues and more with compassion and insight. Fast-paced and thrilling.” —Kirkus Reviews

“In this compassionate study, Kiehl, professor of psychology, neurosciences, and law at the University of New Mexico, attempts to provide a way to understand and improve the lives of psychopaths. . . . Kiehl’s goal is not to sensationalize, but rather to learn and assist. . . . His pedigree speaks volumes: He has devoted a good portion of his career to this oft-maligned population.” —Publishers Weekly

“A renowned neuroscientist provides us with a fascinating account of his personal journey into the mind of the psychopath.” —Robert D. Hare, professor emeritus, University of British Columbia, and author of Without Conscience

“A must-read! Dr. Kiehl’s stories about psychopaths are as authentic as can be. I found Dr. Kiehl’s research formed the backbone of my work in analyzing the behavioral signature of a psychopath left behind at the crime scene. Whether you work in mental health, law enforcement, the judiciary, or research, don’t trust your gut about this disorder—learn about it from one of the foremost experts in the field.” —Mary Ellen O’Toole, special agent (retired), Behavioral Analysis Unit (BAU), Federal Bureau of Investigation (FBI)

“Highly engaging and personal perspective from a world-leading scientist in the field of psychopathy research. What sets this book apart is the combination of an accessible overview of the cutting-edge science and the compelling and authentic portrayal of what individuals with psychopathy are really like.” —Essi Viding, professor of developmental psychopathology, University College London

“By Primates standards, humans are intensely social, affiliative, and empathic. Thus, we are fascinated with the rare individuals who lack those traits, who have a reptilian indifference to what makes humans humane. Criminal psychopaths are the iconic example of such terrifyingly broken humans. In this superb book written by one of the pioneers in this field, Kent Kiehl explores what is different about the brains of psychopaths. This is a clear, accessible account of the science and, in addition, an appealing personal story of how Kiehl has gone about his unique science.” —Robert Sapolsky, professor of neurology and neurological sciences, Stanford University

“An exhilarating exploration into the lives, minds, and emotions of criminal psychopaths by one of the leading researchers in the field. This lively and engaging narrative not only educates the reader on the internal machinations of the psychopath, but also takes us through Kiehl’s own life journey of scientific discovery. It’s an irresistible read that is hard to put down. Even after decades of my own research I found myself learning new perspectives on the psychopath. Serious, witty, saddening, and beguiling, The Psychopath Whisperer yells out as a ‘must-read’ for anyone interested in those without conscience.” —Adrian Raine, professor of criminology, psychiatry, and psychology, University of Pennsylvania

“The fascinating story of how Kent Kiehl, a remarkably energetic and accomplished scientist, used functional magnetic resonance imaging (fMRI) and a mobile brain scanner to examine the brains of more psychopathic prisoners than anyone in the world and characterize their dysfunction. Filled with entertaining anecdotes of psychopaths in prison, research collaborations, and scientific discovery, the book discusses the ramifications of his findings to the criminal system and to the treatment of psychopathic juvenile delinquents. An eye-opening read!” —Dr. Joseph Newman, professor of psychology, University of Wisconsin, Madison