New in paperback: 2 A.M. AT THE CAT’S PAJAMAS by Marie-Helene Bertino 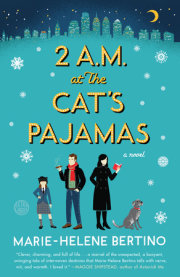 Praise for 2 A.M. at The Cat’s Pajamas

“[The] book shimmers with pratfalls and wit, feeling at once real-to-life and larger-than. . . . Bertino draws rich and real human beings with enviably few strokes of the pen.”—The Millions

“The story of a lonely 9-year-old girl’s quest to perform at a Philadelphia jazz club on Christmas Eve rolls along much like a piece of music—different story lines wind and unwind like musical themes, and these stories are all threaded together with a consistently energized brio like one of the tunes played at the club giving the book its title. Each sentence, as well, is composed with a poetic ear; no line is wasted. That’s rare.”—San Francisco Chronicle

“Exposes both the beauty and burden of urban living . . . A clever tale of missed opportunities and seized ones, Cat’s Pajamas’ characters mirror the story’s inspiration. Like jazz, they’re unruly, improvised, and endlessly impassioned.”—Austin Chronicle

“The novel’s true genius, though, is Bertino’s wry insight into her delightful characters . . . crafted by a writer who shows that less is more, and that perfectly worded less is magic.”—Philadelphia City Paper

“[2 A.M. at The Cat’s Pajamas is] funny and sad and full of a lyricism that is as rare as it is appreciated.”—The L Magazine

“[2 A.M. at The Cat’s Pajamas] is the most charming thing I have ever read in my entire existence on this planet. . . . Come for the beauty and heartbreak, stay for the funny one-liners.”—Book Riot

Marie-Helene Bertino’s enchanting debut novel, 2 A.M. AT THE CAT’S PAJAMAS (October 27, 2015; Broadway Books), now in paperback, is the vivacious and charming story of three unforgettable characters who will see their lives change over the course of one extraordinary day in the city of Philadelphia. Bertino is also the author of the story collection Safe as Houses, which won the 2012 Iowa Short Fiction Prize and The Pushcart Prize, and was long-listed for The Story Prize and The Frank O’Connor International Short Story Prize. An Emerging Writer Fellow at New York’s Center for Fiction, she has spent six years as an editor and writing instructor at One Story.

2 A.M. AT THE CAT’S PAJAMAS begins on a quiet morning in a Philadelphia apartment the day before Christmas Eve, where we meet the precocious and smart-mouthed nine-year-old Madeleine Altimari. Madeleine’s mother has recently died, and her father is still lost in his grief. Madeleine finds solace in music and aspires to become a jazz singer like her late mother, “whose voice could redirect the mood of a room.” Just two days shy of her tenth birthday, she is about to have the most remarkable day of her life.

After facing down mean-spirited classmates and rejection at school, Madeleine decides today is the day to find Philadelphia’s legendary jazz club, The Cat’s Pajamas, and make her debut on stage. On the same day, Madeleine’s fifth-grade teacher, Sarina Greene, who has moved back to Philly after a divorce, is nervously looking forward to a dinner party that will reunite her with her high school love. And across town at The Cat’s Pajamas, club owner Jack Lorca discovers that his beloved venue may be closed by the end of the night due to financial woes. As we follow these three lost souls over the course of twenty-four hours, we also meet a cast of eccentric Philadelphians who surround them—from the daffy but well-intentioned coffee shop owner, Mrs. Santiago, to Ben, Sarina’s high school crush, to Melissa, the former “snake lady” exotic dancer who is Lorca’s long-suffering girlfriend and last hope for love, to Pedro, the dog with incurable ennui. With sharp wit and irrepressible spirit, Marie-Helene Bertino turns her home city of Philadelphia into a magical place where anything can happen.

A sparkling and original novel, 2 A.M. AT THE CAT’S PAJAMAS will capture your heart and make you root for Madeleine, Sarina, Lorca, and those whose lives they touch. The novel is a torch song to the beauty and power of music and the seemingly small moments that recalibrate our lives forever.

ABOUT THE AUTHOR: Marie-Helene Bertino’s stories have appeared in the Pushcart Prize XXXIII: Best of the Small Presses anthology, North American Review, Gigantic, Gulf Coast, Mississippi Review, Inkwell, Indiana Review, American Short Fiction, Five Chapters, West Branch, Electric Literature’s Recommended Reading, Storyville, The Common, and Mississippi Review’s Anthology 30. She teaches at NYU, the Center for Fiction, the Sackett Street Writers’ Workshop, and the One Story Workshop for Writers, and has been invited to read and teach at bookstores and universities in America and abroad, including the Brooklyn Book Festival, the Iowa Writers’ Workshop, the University of Pennsylvania, New York University, Ithaca College’s New Voices Literary Festival, and the Frank O’Connor International Short Story Festival in Cork, Ireland. She has received fellowships from the MacDowell Colony and Hedgebrook. A Philadelphia native, she lives in Brooklyn.

Additional Praise for 2 A.M. at The Cat’s Pajamas

“The purely original construction of an irresistible story . . . Readers will fall in love. . . . This assured, moving, brilliantly funny tale of music, mourning, and off-kilter romance entrances with its extraordinarily inventive language. Be prepared for a quick reread of this novel to try to answer the question: How did Bertino do that?”—Library Journal (starred review)

“A torch song to the power of jazz, determination and serendipity . . . Bertino’s carefully crafted verbal cadence gives Philadelphia a thumping heartbeat that captures the feel of the jazz medium perfectly. . . . Funny and wise, this first novel will leave readers with smiles on their faces and a song in their hearts—something with a little swing to it, naturally.”—Shelf Awareness

“Vibrant . . . Bertino’s characters are spot-on, and her special brand of humor brings each one to life in this fresh and charming tale.”—Booklist

“2 A.M. at The Cat’s Pajamas won me over heart and soul. With Madeleine Altimari, a nine-year-old aspiring jazz singer with a wonderful talent for cursing, Bertino has created one of the most winning and wonderful characters I’ve met in a long time. Read this book to see a debut author doing something really special, crafting a story where human kindness meets up with an inhospitable world and real magic happens in the aftermath.”—Kevin Wilson, New York Times bestselling author of The Family Fang

“Marie-Helene Bertino bops across Philadelphia like an alley cat on the run, energetic and wild. Her sentences are sharp and surprising, and her wonderful story is full of heart. There is funny poetry in the sound of loneliness, and Bertino has found it.”—Emma Straub, author of The Vacationers and Laura Lamont’s Life in Pictures

“Clever, charming, and full of life . . . Like the best jazz, 2 A.M. at The Cat’s Pajamas is a marvel of the unexpected, a buoyant, swinging tale of interwoven destinies that Marie-Helene Bertino tells with verve, wit, and warmth. I loved it.” —Maggie Shipstead, author of Astonish Me and Seating Arrangements

“2 A.M. at The Cat’s Pajamas is as winning and funny as the nine-year-old at its heart, and I love it for the way its protagonists turn their back on their city’s cruddiness and their own losses to proclaim their happiness to be in this world. They offer wryness as the antidote to self-pity and benevolence as the antidote to isolation, and they demonstrate how even the most forsaken can turn themselves into a warm, dry house.”—Jim Shepard, National Book Award­­­­–shortlisted author of Like You’d Understand, Anyway

“2 A.M. at The Cat’s Pajamas is a recipe box full of wonders. With a wildly entertaining cast of characters, Marie-Helene Bertino soars through her native city of Philadelphia, zeroing in with great beauty, wit, skill, and love on the exact moments in time that change our lives forever.”—Hannah Tinti, author of The Good Thief

“Once you enter the imagination of Marie-Helene Bertino—a world as weird as it is warm—you will not want to leave. Each sentence is a pop-up box: first delightful for its sweet music, then profound with the shock of truth. This is a dazzling book.”—Eleanor Henderson, author of Ten Thousand Saints

“2 A.M. at The Cat’s Pajamas is beautiful, alive, and moving. Marie-Helene Bertino has a mesmerizing way with words. . . . … [This is] one of those books that stays in your head long after you’ve finished it, like a song.”—Sara Crowe, author of Campari for Breakfast

“Sympathetic characters and an evocative setting combine in a story that takes some most unexpected turns. It’s thrilling to see bravery reminiscent of short story–telling translate into a novel. The dénouement had me in tears, in stitches, and then doing a double take at an ending that seems to come out of nowhere.”—Claire King, author of The Night Rainbow