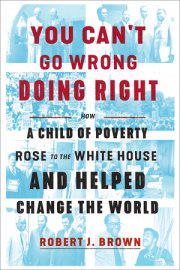 “A memoir from one of the most understated yet pivotal players in the history of American civil rights . . . A humble and timely book that speaks to an era of sweeping change and a reminder that faith and love are two of the best weapons to counter hatred.”

Throughout his life, Robert J. Brown has quietly played an essential role in some of the twentieth century’s most pivotal moments. While working to advance the rights of minorities in the U.S. and abroad, he was jailed and threatened in the civil rights era, slashed with a knife, spit on, sent on missions around the world by the President of the United States, challenged by authorities for defying apartheid laws in South Africa, and narrowly escaped several bombings, all while working alongside renowned figures including Dr. Martin Luther King Jr. and Nelson Mandela. In YOU CAN’T GO WRONG DOING RIGHT: How a Child of Poverty Rose to the White House and Helped Change the World (on sale January 15), Brown offers an inside look at those historical moments, while also sharing how his grandmother Nellie’s wise advice guided and kept him grounded throughout his life.

The great-grandson of a slave, Brown was born in 1935 in High Point, North Carolina, where he was raised by his grandmother, whom he called “Mama.” After dropping out of college to help support his aging grandparents, Brown joined the town’s police force and was soon assigned a job as a federal agent in New York City. It was there he first met Dr. Martin Luther King and a young Bobby Kennedy, who shadowed Brown while he worked an undercover drug deal.

Feeling the pull of the groundbreaking civil rights work being done in the south, Brown returned to his hometown to pursue a career in public relations. As sit-ins at Woolworth counters rocked the nation, Brown talked his way into a meeting with a company executive, which landed him a job helping the corporation with its “Negro problems” and ultimately pushing to integrate the chain’s formerly segregated lunch counters. His successes soon made him a critical mediator between corporations such as A&P (at the time, the largest grocery store chain in the nation) and civil rights groups such as the Southern Christian Leadership Conference, on whose board he served alongside Dr. King and other notables of the day. “The formation of the SCLC was a call to action that I could not resist,” Brown writes. “I believed their cause was vitally important, and wanted to help them in any way possible.”

Disillusioned by the assassinations of King and Bobby Kennedy, Brown resolved to change directions so that he could push for social change from the inside rather than the outside. “I’d seen what corporate America and political leaders could do to accelerate change,” Brown says. “They had the power to do what needed to be done without a lot of debate. I resolved to work from the inside to give them the motivation to do it.” Ignoring the criticisms of those who deemed him a traitor and an Uncle Tom, Brown became a top adviser to President Nixon, who told him he had complete authority to do what he thought needed to be done for black America. Under Nixon, Brown revamped initiatives to spur black capitalism, created a program that required government agencies to award a certain number of their contracts to minority-owned businesses, pushed for racial equality in the military, and increased federal funding for black colleges and universities.

After working towards racial equality for decades in the U.S., Brown’s business took him to South Africa in 1985, which much to his amazement he found worse than 1962 Birmingham. He turned down a nomination to serve as the U.S. ambassador to that country, but a short time later was drawn even more deeply into South Africa’s affairs when he accepted Coretta Scott King’s invitation to accompany her to a meeting with Winnie Mandela. Brown soon forged a strong friendship with the Mandela family that came to include two private meetings with Mandela himself, in prison, as well as, shockingly, a meeting with then-President Botha, who represented the worst of all the racism Brown had experienced in his life.

No matter the circumstances, Brown saw his role as a humble one. “I never pretended to be, nor did I aspire to be, the most important person in the room,” Brown says. “I’d been taught from childhood that we all are created to serve a higher power.” YOU CAN’T GO WRONG DOING RIGHT tells the unsung story of Brown’s unseen role in shaping America.