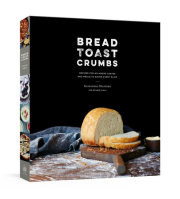 For many, bread baking can seem like an impossible feat. In her debut cookbook, Bread Toast Crumbs: Recipes for No-Knead Loaves and Meals to Savor Every Slice (Clarkson Potter | April 4, 2017 | $30.00 | Hardcover), Alexandra Stafford demystifies this art and shares her loaf-to-crumb approach for what to make with the slices and heels and nubs readers are bound to have around their kitchens.

Alexandra grew up eating her mother’s peasant bread—a recipe that was a closely guarded family secret—at nearly every meal. When her mother finally gave her permission to post the recipe on her blog, it was an instant sensation with her readers for its foolproof simplicity. In Bread Toast Crumbs, Alexandra shares this now-famous recipe, along with its many variations in both flavor and form, including Cinnamon-Sugar Monkey Bread, Quinoa and Flax Bread, and Buttermilk Pull-Apart Rolls. She then shows readers how to transform that one component into many weeknight meals with recipes such as Food Cart Grilled Cheese, Seafood Bisque in Bread Bowls, and Mascarpone and Sugared Fruit Toasts in Toast and Mustard-Roasted Chicken with Lemon-Thyme Bread CrumbsFish Sticks with Tartar Sauce, and Blueberry Brown Betty in Crumbs.

With 135 recipes and more than 100 stunning photos, Bread Toast Crumbs will surprise readers as it showcases any loaf’s wonderful adaptability.

After graduating from Yale, Alexandra Stafford moved to Philadelphia, where she attended cooking school and worked in catering and restaurant kitchens. She launched her blog, Alexandra’s Kitchen, and began writing about food. Her blog was a finalist for the 2016 Saveur Blog Awards “Most Inspired Weeknight Dinners” category. Today, she contributes regularly to Food52.com. She lives near Schenectady in upstate New York with her husband and their four young children. Visit her at alexandracooks.com or on Instagram at @alexandracooks.