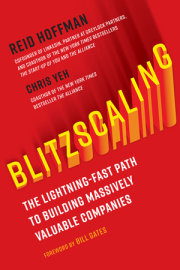 –From the Foreword by Bill Gates

“The book the start-up world has been waiting for. I can’t think of any other that so perfectly captures the specific challenges – and opportunities – that a company faces at every stage of growth. This book shares some of the key secrets for building mission-oriented, global businesses at speed.”
–Brian Chesky, Cofounder and CEO, AirBnb

“Blitzscaling shows how companies can build value for customers and shareholders in the digital age. A compelling inside view of how the new economy is being built and is transforming global business.”

–Sheryl Sandberg, New York Times bestselling author of Lean In and Option B

For most of the world, “Silicon Valley” and “start-up” might as well be synonymous.  Yet explaining Silicon Valley’s success at producing a disproportionate number of iconic companies by saying that the region’s entrepreneurs are good at starting companies is deceptively incomplete. After all, what founder doesn’t aspire to build the next Facebook, Uber, or Airbnb? Yet those who manage to do so are exceedingly rare. So what separates the start-ups that get disrupted and disappear from the ones that become global giants?

The secret is what Reid Hoffman and Chris Yeh call BLITZSCALING: The Lightening-Fast Path to Building Massively Valuable Companies (October 9, 2018; Currency) a set of techniques that allows start-ups and established companies alike to scale up at a dizzying pace and blow competitors out of the water.

When a company grows at a breakneck pace, getting to the next level requires very different strategies from those that got it to where it is today. Inspired by their popular class of the same name at the Stanford Graduate School of Business, BLITZSCALING reveals how to navigate the necessary shifts and unique challenges that arise at each stage of a company’s life cycle. Readers will learn how to:

Drawing on Hoffman’s experiences as a cofounder of PayPal and LinkedIn, as a leading investor in Facebook and Airbnb, and in helping numerous start-ups grow bullion-dollar businesses as an investor at Greylock Partners, Hoffman and Yeh offer a framework that companies of any size—from scrappy garage start-ups to established market leaders—can follow to blitzscale their way to global dominance.

Reid Hoffman is a partner at Greylock Partners. He co-founded LinkedIn in 2003 in his living room; it now has more than 200 million members in 200 countries and territories around the world. He joined Greylock Partners in 2009. He serves on the boards of Airbnb, Convoy, Edmodo, and Microsoft, in addition to some as yet unannounced startups. He leads the Greylock Discovery Fund, which invests in seed-stage entrepreneurs and companies; the fund is an extension of his prior angel investing, which included Facebook, Flickr, Last.fm, and Zynga. Prior to LinkedIn and Greylock.  He served as executive vice president at PayPal, where he was a founding board member. He believes strongly in the ability of entrepreneurship and technology to improve the world, and serves on the boards of Biohub, Kiva, Endeavor, and DoSomething.org.  He co-authored the best-selling books The Startup of You and The Alliance. He earned his master’s degree in philosophy from Oxford University as a Marshall Scholar, and his bachelor’s degree with distinction in symbolic systems from Stanford University.

Chris Yeh is an entrepreneur, writer, and mentor.  He helps interesting people do interesting things.  Yeh earned two Bachelor’s degrees with distinction from Stanford University and an MBA from Harvard Business School, where he was a Baker Scholar. He is co-author of the New York Times best-seller The Alliance, with Reid Hoffman and Ben Casnocha.