Black Earth: The Holocaust as History and Warning by Timothy Snyder

A Landmark Work of History—and a Warning for the Future 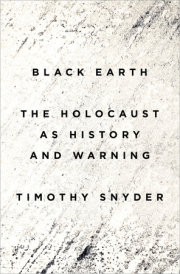 “Timothy Snyder is now our most distinguished historian of evil. Black Earth casts new light on old darkness. It demonstrates once and for all that the destruction of the Jews was premised on the destruction of states and the institutions of politics. I know of no other historical work on the Holocaust that is so deeply alarmed by its repercussions for the human future. This is a haunted and haunting book—erudite, provocative, and unforgettable.”

“In this unusual and innovative book, Timothy Snyder takes a fresh look at the intellectual origins of the Holocaust, placing Hitler’s genocide firmly in the politics and diplomacy of 1930s Europe. Black Earth is required reading for anyone who cares about this difficult period of history.”

“Timothy Snyder’s bold new approach to the Holocaust links Hitler’s racial worldview to the destruction of states and the quest for land and food. This insight leads to thought-provoking and disturbing conclusions for today’s world. Black Earth uses the recent past’s terrible inhumanity to underline an urgent need to rethink our own future.”

“Black Earth is provocative, challenging, and an important addition to our understanding of the Holocaust. As he did in Bloodlands, Timothy Snyder makes us rethink those things we were sure we already knew.”

“Timothy Snyder argues, eloquently and convincingly, that the world is still susceptible to the inhuman impulses that brought about the Final Solution. This book should be read as admonition by presidents, prime ministers, and in particular by anyone who believes that the past is somehow behind us.”

It was little more than seventy-five years ago that human history witnessed an unprecedented crime—the deliberate mass murder of millions in the aim of removing a whole people from the planet. The Holocaust has defined countless lives and reshaped our world—and yet, when it comes to our understanding of just why and how this genocide took place, we know so little. One of our generation’s most acclaimed and respected historians, Timothy Snyder has spent years in the painstaking effort to recover the experience of the victims, the intentions of the killers, and the history of the Europe they shared. The result is BLACK EARTH: The Holocaust as History and Warning (Tim Duggan Books; September 8, 2015), a remarkable work of scholarship that offers a new and innovative interpretation of the Holocaust—and a frightening warning about our future.

BLACK EARTH draws on new archival sources from Eastern Europe and on a vast historiography. As a reader of ten European languages, Snyder is the first historian to master this hugely diverse collection of source material and to depict the entirety of the Holocaust in accessible terms. As he explains in a forceful re-reading of the fundamental Nazi texts, the Holocaust began in Hitler’s mind. He understood the planet as a limited resource and portrayed the Jews as a supernatural power that prevented the races from undertaking the bloody struggle for what they deserved. Eradicating the Jews was a goal as much metaphysical and ecological as it was political and economic: doing so, Hitler thought, would restore balance to the entire planet and assure its bounty to the German people. No political compromise or scientific innovation could save the Germans or the earth; for Hitler such ideas were Jewish lies. Hitler’s worldview required a new kind of war—one that would allow Germans to destroy other states. As Germany absorbed Austria, dismantled Czechoslovakia, and invaded Poland, Jews were separated from states because states ceased to exist. It was in the territories of the Soviet Union, however, where the mass killing of Jews began.

Hitler saw the Soviet Union as an illegitimate Jewish regime, controlling the bountiful Ukrainian lands that Germany needed to survive and prosper. He conceived of the attack on the USSR as a first blow against the world Jewish conspiracy and as the beginning of a vast German colonization of the east. And so it was here, in the territories where German power would displace the Soviet order, that special German units were able to achieve stateless zones and implement techniques of mass killing—with the aid of German police and soldiers, as well as the cooperation of local people. Mass shooting was the technique that proved that a Holocaust was possible, and preceded the murder by gassing that was then applied in occupied Poland and to Jews throughout Europe.

While the first half of BLACK EARTH explains how Jews were killed, the second describes how Jews survived. Using vast collections of largely untapped material from Jewish survivors, Snyder describes in touching and wrenching human detail the heroism and virtue of the rescuers, whom he calls the “righteous few.” But while the force of their moral example must be preserved, the outcome of their efforts confirms Snyder’s general argument: insofar as states were destroyed, Jews could be murdered. In the stateless zones, Hitler had created an environment where no structure supported virtue.

BLACK EARTH concludes with the chilling prospect that we have misunderstood the Holocaust and the essential lessons it should have taught us. If the Holocaust was indeed, as Snyder’s carefully constructed argument demonstrates, a result of ecological panic and state destruction, then our misunderstanding of it has endangered our own future. The world of the early twenty-first century resembles the world of the early twentieth more than we realize—and some of our own sensibilities are closer to those of Europeans of the 1930s than we might like to think. As Snyder explains, we cannot afford to confine the Holocaust to museums and memory. If we do not understand the lessons of the Holocaust, an unprecedented crime could become a precedent for the future.

Timothy Snyder is the Housum Professor of History at Yale University and a member of the Committee on Conscience of the U.S. Holocaust Memorial Museum. He is the author of five award-winning works of history, including Bloodlands: Europe Between Hitler and Stalin, which received the Literature Award of the American Academy of Arts and Letters. Snyder is a frequent contributor to the New York Review of Books and the Times Literary Supplement and a former contributing editor at the New Republic. He is a permanent fellow of the Institute for Human Sciences, serves as the faculty advisor for the Fortunoff Video Archive for Holocaust Testimonies, and sits on the advisory council of the YIVO Institute for Jewish Research. He lives in New Haven, Connecticut.