“Be the Change” with the B.T.C. Old-Fashioned Grocery, a symbol of how good food can bring people together and empower a community to revitalize Main Street, USA.

Recipes and Stories from a Southern Revival 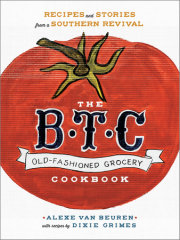 In a small town twenty-five minutes outside of beautiful Oxford, Mississippi, there’s been a revival of food and community. Bucolic small-town Water Valley wasn’t the most logical place to start a grocery and cafe, but that’s just what Alexe van Beuren did, in a historic building that her husband had saved from demolition. The B.T.C. Old-Fashioned Grocery opened in 2010 amidst a cloud of hope and dreams, full of glass-bottled milk, local produce, and Cora’s fried pies. Trouble loomed when hope and dreams proved insufficient for the daily realities of running a small business when lo and behold, Dixie Grimes, a five-star chef, walked through the door in need of a job. Within a few months, Dixie’s food had folks lining up at the window, and the two women discovered that after all, this small town in rural Mississippi was exactly where they needed to be.

The B.T.C. quickly cemented its place as the center of town life, serving hearty breakfasts and comforting lunchtime meals, as well as selling prepared foods like casseroles, salads, and spreads to take home. With vibrant storytelling, 120 recipes, and 60 evocative full-color photographs, The B.T.C. Old-Fashioned Grocery Cookbook (Clarkson Potter; March 18, 2014; $29.99; Hardcover) shares the inspiring story of how dreams can pay off in a small-town tale of food, friendship, and tradition.

Some recipes featured in The B.T.C. Old-Fashioned Grocery Cookbook include:

The B.T.C. Old-Fashioned Grocery Cookbook shares some of the store’s best recipes, giving home cooks everywhere a taste of the food that brought a community together, sparking friendships, reviving traditions, and strengthening an American Main Street.

ALEXE VAN BEUREN is the owner of the B.T.C. Old-Fashioned Grocery. Raised in the Blue Ridge Mountains of Virginia, she now lives with her husband and their two children in Water Valley, Mississippi.

DIXIE GRIMES is an Oxford, Mississippi, native who has cooked for more than two decades in many fine restaurants. She has helmed the kitchen of the B.T.C. since 2011.