This revelatory oral history of basketball draws upon hundreds of hours of interviews with the greatest players, coaches, executives, and journalists in the history of the game, including the NBA, WNBA, NCAA, and international basketball 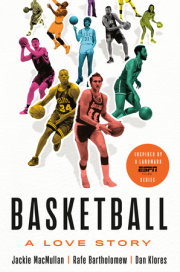 “This will be a favorite now and for years to come.”
—Booklist, Starred Review

“With unprecedented access to an unbelievably robust lineup of players, coaches, executives, journalists, and others associated with the game, the authors bring readers into the action both on and off the court, rendering the entire history of the game in easy-to-read bites interspersed with helpful contextual stories and background information . . . this is a book for true basketball fans, who will devour every page . . . must-read catnip for hoop heads.”
—Kirkus Reviews, Starred Review

In an effort to tell the comprehensive story of basketball in all its fascinating dimensions, two of the most well-respected basketball journalists working today, Jackie MacMullan and Rafe Bartholomew, collaborated with award-winning director, Dan Klores, to produce a groundbreaking book based on interviews with more than 170 of the sport’s all-time greats. The interviews, conducted by Klores and his team of producers for a multi-part ESPN Films series to be released in fall 2018, include legendary players, such as Bill Russell, Kobe Bryant, LeBron James, and Magic Johnson; renowned coaches like Phil Jackson and Coach K; and numerous executives, commissioners, and journalists.

Combing through nearly a thousand hours of conversations, MacMullan and Bartholomew compiled the candid stories and shaped them into what may become one of the most important basketball books ever written, BASKETBALL: A Love Story (Crown Archetype; On Sale September 18, 2018; $30). The book, which shares its title with the forthcoming ESPN Films series, surpasses other compilations in sheer volume and depth.

BASKETBALL: A Love Story is a vital piece of sports journalism, full of compelling and never-before-heard tales, making it an invaluable narrative of basketball’s history and its transformative influence on the world. MacMullan and Bartholomew allow the voices of the athletes, coaches, executives, and journalists who helped build basketball into a global game to speak for themselves-complete with details that have never been discussed on the record-and only interject prose to provide richer context for these compelling accounts of how basketball came to be, and about what it means to those who have given their lives to the game.

In this sweeping exploration you’ll find unbelievable stories, such as:

• Shaquille O’Neal‘s emotional account of a racist high school indignity-and his rim-bending response
• Ann Meyers‘s recollection of being the first woman to try out for an NBA team in 1979
• The schism between legendary coaches Pat Summitt and Geno Auriemma, and why UConn and Tennessee no longer play each other
• An insider’s look at the controversial finish to the 1972 Olympic gold medal game between Team USA and the USSR
• The real story behind Michael Jordan‘s 1985 feud with George Gervin
• How a young Nancy Lieberman muscled her way into pickup games at Harlem’s famed Rucker Park
• The NBA’s blackballing of Connie Hawkins and the legal fight to reinstate him
• When Oscar Robertson defied threats from the Ku Klux Klan to play in a college tournament in North Carolina
• Revealing new insights from Pat Riley and David Stern on the career of LeBron James
• How a dashing New Yorker named Frank McGuire built a legendary basketball program at the University of North Carolina

BASKETBALL: A LOVE STORY is more than an oral history of the sport at a moment when its popularity is exploding; it is a treasure trove of information and insights, bringing both the novice and the most seasoned fans courtside. This book is a story of the industry and community basketball has fostered, as well as a look at the complicated past of the sport we love.

ABOUT THE AUTHORS
JACKIE MACMULLAN is a television analyst for ESPN and a senior writer for ESPN.com. She has been covering basketball for more than three decades, beginning at the Boston Globe, where she was the first female sports columnist in the paper’s history. She covered the National Basketball Association from 1995 to 2000 for Sports Illustrated and has authored four books, including New York Times bestsellers When the Game Was Ours and Shaq Uncut. In 2010, MacMullan became the first-ever female recipient of the Basketball Hall of Fame’s Curt Gowdy Media Award for outstanding contributions to basketball.

RAFE BARTHOLOMEW is the author of Pacific Rims and Two and Two: McSorley’s, My Dad, and Me. He was the features editor at Grantland, and his work has also appeared in Slate, the New York Times, Chicago Reader, Deadspin, and other leading online and print publications. His stories have twice been honored in the Best American Sports Writing series.

DAN KLORES has been awarded the Independent Spirit Award for best director of the year for his classic documentary Crazy Love, and the Peabody for Black Magic. Four of his films premiered at the Sundance Film Festival and he has written for the New York Times, New York magazine, Daily News, Esquire, and other publications. He is the author of Roundball Culture and three Off-Broadway plays.