Adventures in Caring Too Much 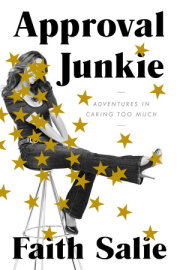 journalist and comedian FAITH SALIE reflects on a lifetime of looking

for validation in all the wrong places—and reveals how

she finally overcame her addiction to gold stars.

“When Salie…writes from the heart, the memoir is as pleasing as they come.”

Phi Beta Kappa. Rhodes Scholarship. Two Emmy Awards for her work on the venerable CBS News Sunday Morning. And her crowning achievement: Miss Aphrodite 1989—the pinnacle for talented beauty queens at Atlanta’s North Springs High School. Who was Faith Salie trying to impress? Pretty much everyone.

As a devoted daughter, a television and public radio star, and a wife who knows how to plan both her first and second wedding overseas, Salie once led a life defined by pleasing others. But lately, since emerging from a toxic relationship, losing her mother, and becoming a mother herself, after multiple miscarriages, she’s discovered the rewards of finding her own voice and believing that she is enough (sometimes disturbingly more than enough when it comes to her lactation abilities). Now, in her first book, Salie charts her bumpy ride to self-fulfillment, in APPROVAL JUNKIE: Adventures in Caring Too Much (Crown Archetype, on sale April 19, 2016), delving into such topics as:

A book that will resonate with any woman who’s struggled with being judged—and judging herself—for her looks, her brains, her love life, her opinions, or her parenting skills, APPROVAL JUNKIE offers reassurance without lowering the bar. “Some books will tell you to accept yourself and all your flaws. To embrace your curves. You should probably do that if you can,” Salie writes. “That kind of ridiculous, enlightened talk never got me where I wanted to go unless where I wanted to go was my refrigerator to binge on Reddi-wip straight into my mouth. . . . This is a book that tells you you’re okay just the way you are if the way you are is someone with a palm that doesn’t mind being smacked with a high five.” Ultimately, Salie learns to validate herself and realizes that “approval of your own life is called gratitude.”