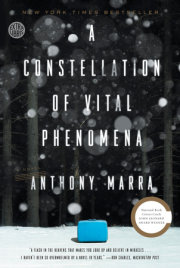 A Constellation of Vital Phenomena

A New York Times Notable Book of the Year

A San Francisco Chronicle Top Ten Books OF THE YEAR

A Washington Post Top Ten BookS of the Year

PRAISE FOR A CONSTELLATION OF VITAL PHENOMENA:

“Extraordinary…. [A] 21st-century War and Peace…. Marra seems to derive his astral calm in the face of catastrophe directly from Tolstoy….”

“A flash in the heavens that makes you look up and believe in miracles…Here, in fresh, graceful prose, is a profound story that dares to be as tender as it is ghastly, a story about desperate lives in a remote land that will quickly seem impossibly close and important… As the elements of this complicated plot begin to align in ways too tragic and moving to anticipate, the past resolves into focus; the future is freighted with anguish but flecked with hope. I haven’t been so overwhelmed by a novel in years. At the risk of raising your expectations too high, I have to say you simply must read this book.”

“A powerful tale… The moment Akhmed walks into the hospital with Havaa…rivals anything Michael Ondaatje has written in its emotional force….There are many reasons to read A Constellation of Vital Phenomena. To enter the tragedy of Caucasus history that has been dishonored by the Boston Marathon bombings, allegedly committed by two ethnic Chechen immigrants; to marvel at the lack of fear in a writer so young. To read a book that can bring tears to your eyes and force laughter from your lungs….But the best reason to read this novel, is that this story reminds us how senseless killing often wrenches kindness through extreme circumstances.”

“Amazing first novel… brilliant writing… A Constellation of Vital Phenomena is one of the most accomplished and affecting books I’ve read in a very long time… Though the lives lived in this novel can seem unbearable, what Anthony Marra has done is to diligently describe them in passionate, extraordinary prose. In A Constellation of Vital Phenomena they become not only “write-able,” but also highly, deeply readable.”

“A prose writer who resembles the Joseph Heller of Catch-22 and the Jonathan Safran Foer of Everything Is Illuminated. Mr. Marra is a lovely writer about families. He offers what might be the best definition of what one sister means to another that I have ever read. He is, in fact, a lovely writer about many things. …A mighty effort.”

“This beautiful work will matter long after Chechnya has disappeared from our headlines…In his sure hand, the whole of it comes completely to life…The sense of connectedness is as meaningful as the particulars of it. In exquisite imagery, Marra tends carefully to the twisted strands of grace and tragedy. Everything in [it] is dignified with a hoping, aching heartbeat.”

“With remarkable pathos and a surprising amount of humor, Marra keeps the focus on the relationships, struggles, and tiny triumphs of an unforgettable group of characters… Marra creates a specific and riveting world around his characters, expertly revealing the unexpected connections among them.  Constellation deserves to be on the short list for every major award. It’s an absolute masterpiece.”

Anthony Marra’s exquisite debut novel, A Constellation of Vital Phenomena (Hogarth; February 4, 2014) is about the transcendent power of love in wartime. When Hogarth published the book in hardcover in May 2013, it became an instant New York Times bestseller—and reviewers across the country weighed in on Marra’s incredible literary talents.  Even President Obama purchased a copy of the novel during his annual trip to bookstores for American Express’s “Small Business Saturday.”  Marra sets the story in contemporary Chechnya, a republic in southern Russia, which has endured a series of devastating wars, occupations, and insurgencies that began in 1994 and have only recently subsided (Marra has himself traveled through Chechnya).  During the years in which the novel takes place, Russian forces abducted anyone suspected of abetting Chechen separatists, a practice which continues to this day.

A Constellation of Vital Phenomena begins in a snow-covered village where eight-year-old Havaa watches from the woods as Russian soldiers abduct her father in a midnight raid, accusing him of conspiring with Chechen rebels.  Not far away their lifelong neighbor Akhmed has also been watching, fearing the worst when the soldiers set fire to Havaa’s house.  But when he finds her hiding beyond the blaze, huddled beside a strange blue suitcase, he decides to seek sanctuary in the only safe place he can think of: an abandoned hospital where he has heard rumor of one brilliant but troubled remaining surgeon.  For the talented and self-reliant Sonja, the arrival of Akhmed and Havaa is an unwelcome addition to the stream of wounded rebels and refugees she treats while desperately awaiting the return of her missing sister.  But over the course of five dramatic days, her life will change as a tapestry of compassion, betrayal, and forgiveness emerges to weave together the pasts of these three unlikely companions and ultimately decide their fate.

With The English Patient’s dramatic sweep and The Tiger’s Wife’s graceful entwining of family and history, A CONSTELLATION OF VITAL PHENOMENA tells the story of the things in us that survive—the love a parent feels for a child, or the love that develops between two strangers—and the complexities and sacrifices that love demands.

ANTHONY MARRA is the winner of a Whiting Award, Pushcart Prize, and the Narrative Prize.  A Constellation of Vital Phenomena won the 2014 National Book Critics Circle’s inaugural John Leonard Prize and the 2014 Anisfield-Wolf Book Award in fiction, as well as the inaugural 2014 Carla Furstenberg Cohen Fiction Award. Marra’s novel was a National Book Award long list selection as well as a shortlist selection for the Flaherty-Dunnan first novel prize.  In addition, his work has been anthologized in The Best American Nonrequired Reading 2012.  He received an MFA from the Iowa Writers’ Workshop and was a Stegner Fellow at Stanford University, where he now teaches as the Jones Lecturer in Fiction. He has lived and studied in Eastern Europe, and now resides in Oakland, CA. A Constellation of Vital Phenomena is his first novel. Visit:http://anthonymarra.net/.