The American Miracle by Michael Medved

Divine Providence in the Rise of the Republic 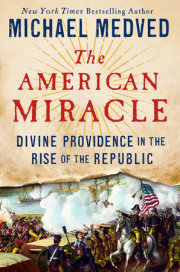 The American Miracle: Divine Providence in the Rise of the Republic

DOES AMERICA OWE ITS UNPRECEDENTED POWER AND PROSPERITY TO

ACCIDENTS OF HISTORY, INSPIRED LEADERSHIP, OR SOMETHING EVEN MORE POWERFUL— AND MYSTERIOUS?

Conservative radio host and bestselling author Michael Medved examines key turning points in American history to show why even our irreligious founders discerned a supernatural hand in directing the new nation’s remarkable ascent. These startling, spell-binding, often unknown stories bear directly on how we understand America’s place and fortunes in the world today, and what we can expect for our future.

In THE AMERICAN MIRACLE: Divine Providence in the Rise of the Republic (On Sale November 29, 2016; Crown Forum), Medved explores the unlikely emergence of the United States from the perspective of the God-haunted generations who experienced it, from the Pilgrims to Lincoln. In a sweeping narrative, bursting with dramatic episodes and larger-than-life personalities, The American Miracle reveals how:

In an election season when millions worry over the nation losing its way, The American Miracle affirms America as “fortune’s favorite,” shaped by a distinctive destiny from our beginnings to the present day.

MICHAEL MEDVED’s daily three-hour radio show reaches five million listeners on more than three hundred stations coast to coast. He is the author of twelve other books, including the bestsellers The 10 Big Lies About America, Hollywood vs. America and What Really Happened to the Class of ’65?.

Michael Medved is available for interviews upon request.