The Snaps, Drops, Jumbles, Tea Cakes, Bars & Brownies That We Have Loved for Generations 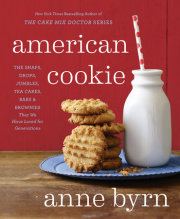 From the beloved author of the bestselling Cake Mix Doctor series and American Cake comes a delicious tour of America’s favorite treats, cookies, and candies.

“No matter how much you know about America’s favorite little sweets, you’ll learn so much more from Anne Byrn’s new book. Every recipe comes with a story as delicious as the small bite it describes. And best of all, every small bite begs to be baked.”
―Dorie Greenspan, James Beard Award–winning author of Dorie’s Cookies

“Anne Byrn has not only given us a hundred reasons to bake for ourselves and others, but she has also curated a collection of histories as rich and delicious as the treats themselves.”
―Kelly Fields, James Beard Award nominee and chef-owner of Willa Jean

With American Cake, ANNE BYRN, New York Times bestselling author and former food editor, took home bakers on a delicious tour throughout history of America’s cakes. Now in her new book AMERICAN COOKIE: The Snaps, Drops, Jumble, Tea Cakes, Bars & Brownies That We Have Loved for Generations (On Sale August 21, 2018; $24.99; Rodale Books), Anne is delving into the smaller bites, serving a rich historical background to complement each scrumptious recipe. Byrn reinforces the notion that the small cakes, cookies, and treats we love are more than just baked goods; they are representations of memorable times gone by.

AMERICAN COOKIE isn’t just an assorted collection of cherished recipes—it’s a look at the diverse array of history that has shaped the heart of American desserts. Each of the book’s 100 recipes for bite-size treats tells a big story, and each speaks volumes about the growth and changes in America at the time the recipes first appeared. AMERICAN COOKIE narrates the country’s progress while focusing on the American kitchen, and Byrn whips up a multisensory and incredibly detailed historical experience alongside every recipe.

With AMERICAN COOKIE, readers will learn not only how to make dozens of the country’s most beloved bite-size desserts, but will also discover the surprising journey behind each recipe. In AMERICAN COOKIE find:

Early colonists brought over sugar cookies, benne wafers came from Africa, and the iconic chocolate- chip cookie was born at the Toll House Inn in Whitman, Massachusetts—there is so much more to our country’s most treasured and tasty treats than we think we know. Each of AMERICAN COOKIE’s 100 recipes will have readers thinking harder about where their favorite desserts come from, and how their own family recipes fit into America’s broad history of baking.

Extensively researched and lovingly crafted, AMERICAN COOKIE is an ode to the bite-size sweets our nation has enjoyed for generations because our favorite cookies, cakes, and pies are more than just baked goods—they’re representations of different times in both American history and our own lives as well.

Anne Byrn is the bestselling author of American Cake and the Cake Mix Doctor cookbook series. Formerly a food editor at the Atlanta Journal-Constitution and a graduate of the École de Cuisine La Varenne in Paris, Byrn lives with her family in Nashville, Tennessee.