A charming collection of typographical errors, slips of the pen, and embarrassing misprints throughout history

Just My Typo by Drummond Moir 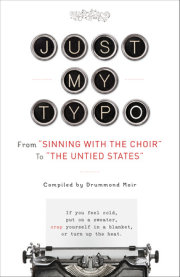 Everybody’s been there: that moment when you realize the email to your boss or your thesis paper contains an embarrassing error. But if it’s any consolation, typos are everywhere in all manner of texts through history, from Shakespeare to the New York Times. Editors, proofreaders, and writers everywhere pull their hair out trying to eliminate mistakes, to no avail. Isn’t it time we learned to laugh at our mistakes instead of despairing over our imperfections?

Drummond Moir’s JUST MY TYPO: From “Sinning with the Choir” to “the Untied States” (Three Rivers Press, Trade Paperback Original, on sale 7/8/14), is a hilarious new collection of typos that celebrates the humanity of our errors and the timelessness of mistakes. It is essential reading for anyone who values the power and peril of the written word.

The laugh-out-loud assortment of errors includes typos from a variety of categories, including:

Drummond even includes autocorrect typos, as well as sections detailing legal typos, romantic typos, and biblical typos! JUST MY TYPO will appeal to anyone who needs to be reminded that they aren’t alone in their mistakes.

Drummond Moir grew up in Edinburgh, Scotland, and studied at St Anne’s College, Oxford, and Daiichi Keizai University in Fukuoka, Japan. He has worked in publishing since 2006 and is currently editorial director at Sceptre publishers in London.