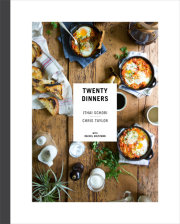 When he’s on tour with his band, Grizzly Bear, what Chris Taylor misses most about home is the comfort of the kitchen and his friends and family who fill it. Together, Chris and his friend, photographer and former professional cook Ithai Schori, decided to rent a house in Hudson, NY, so that they could cook dinner parties for groups of four to forty close friends over the course of a year. Using techniques that Ithai honed working at high-end restaurants in New York City and skills that Chris learned from his mom and perfected during “stages” at some of the world’s top restaurants, they worked their way through twenty dinners. The result is the sumptuously photographed cookbook Twenty Dinners (Clarkson Potter; April 7, 2015; $37.50; Hardcover), which shows readers how and why cooking can be a relaxed, beautiful thing. Through menus of more than 100 seasonally arranged recipes and gorgeous, evocative photographs of their gatherings, you fall into their world, where you and your friends have all day to put food on the table, and where there’s always time for another glass of wine before dinner.

Because Twenty Dinners is about cooking not just for, but with, your friends, Ithai and Chris enlisted their favorite pastry chef, mixologist, sommelier, and baristas to write detailed material on wine pairings, desserts, stocking a home bar, mixing drinks, and buying and brewing fantastic coffee. Menus and recipes featured in the book include:

With Twenty Dinners, Ithai and Chris offer a beautiful cookbook of twenty big dinners’ worth of recipes, their favorite techniques and points of inspiration, and the ideas and tools to make these kinds of gatherings happen for you and your friends.

ITHAI SCHORI is a photographer, videographer, and former professional cook.

CHRIS TAYLOR is a musician, producer, songwriter, and member of the indie rock band Grizzly Bear. A home cook since the age of nine, he’s also done “stages” at London’s St. John Bread & Wine, Noma in Copenhagen, and The Crimson Sparrow in Hudson, NY. While on tour, Chris dreams of grocery shopping.