ON TYRANNY: Twenty Lessons from the Twentieth Century by Timothy Snyder 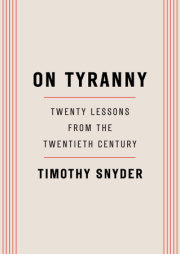 “The Founding Fathers tried to protect us from the threat they knew, the tyranny that overcame ancient democracy. Today, our political order faces new threats, not unlike the totalitarianism of the twentieth century. We are no wiser than the Europeans who saw democracy yield to fascism, Nazism, or communism. Our one advantage is that we might learn from their experience.”

In just a matter of weeks, the United States has seen unprecedented changes to the fabric of our national and global identity under the presidency of Donald Trump. Under the banner of “America First,” Trump has instituted his own brand of nationalism, bringing fear and anger to millions of its citizens and residents and spreading confusion and despair around the world. As noted historian Timothy Snyder explains, history teaches us that this fear in not unfounded. Democracy can fail and has failed. Through the 1920s, ’30s, and ’40s, democracies across Europe would yield to fascism, Nazism, and communism. Americans have always held tight to the belief that such regime change can’t happen here—but that is a dangerous illusion. Having spent his career examining the tragedies and atrocities of the twentieth century, Snyder has studied the ways in which shifts and changes, both large and small, have led to the failure of democratic principles and ideals. As he writes, “history does not repeat, but it does instruct”—and we must heed its warnings.

In ON TYRANNY: Twenty Lessons from the Twentieth Century (Tim Duggan Books; February 28, 2017), Snyder offers today’s reader a guide to identifying and understanding the frightening parallels that exist between our current reality and the reality faced by Europeans of the twentieth century. But Snyder goes further, using history to show us how to effectively resist and bring about change. ON TYRANNY offers invaluable ideas for how we can preserve our freedoms in the uncertain years to come through a series of twenty lessons:

Snyder first introduced these lessons in a Facebook post in November 2016 just days after the presidential election. The post has since received more than one million views, having been reposted, republished, and retweeted countless times. Offering frustrated citizens practical advice from our past, adapted for the world of today, ON TYRANNY is essential reading for our troubled times.

Timothy Snyder is the Housum Professor of History at Yale University. He is the author of Bloodlands: Europe Between Hitler and Stalin and Black Earth: The Holocaust as History and Warning. Snyder is a member of the Committee on Conscience of the United States Holocaust Memorial Museum and a permanent fellow of the Institute for Human Sciences in Vienna.