The Countess of Carnarvon returns

Discover the untold true story behind the show 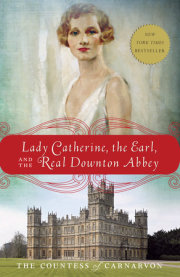 Lady Catherine, the Earl, and the Real Downton Abbey

The Countess of Carnarvon

Millions of fans tune in to PBS each week to catch up on the unfolding drama of the Grantham family in television’s smash hit Downton Abbey, but the story told on the small screen pales in comparison to the real-life history of the Castle. The world was introduced to the story behind the show with Lady Almina and the Real Downton Abbey, which spent more than a year on the New York Times bestseller list. Now, The Countess of Carnarvon returns with a second transporting portrait of Highclere Castle: Lady Catherine, The Earl, and the Real Downton Abbey (Broadway Paperback Original: October 29, 2013).

In the 1920’s, Highclere Castle—the filming location and historical inspiration for Downton Abbey—gets a new mistress. Catherine Wendell, an Anglo-American beauty and descendant of one of New York’s oldest families, is on holiday in Europe when she catches the eye of the womanizing Lord Porchester. Porchey, as he is affectionately known, quickly marries the charming nineteen-year-old Catherine and soon after, the unexpected death of his father leaves the newlyweds in charge of Highclere. In their new role, the couple arranges for the sale of art and artifacts from the Castle through an auction at Christie’s that brings their home a measure of financial stability.

The book closely mirrors the upcoming season of Downton Abbey (debuting in the U.S. on January 5, 2014), which picks up with the Downton residents in 1922, the same year Catherine and Porchey married. Fans of the show and history buffs alike will delight in the new material unearthed here in the story of Lady Catherine. The author’s deft touch, research in never-before-used archives, and clear affection for her subject matter make Lady Catherine a worthy successor to Lady Almina.

Lady Catherine, plunged into the upper echelons of British society, gamely attempts to follow in her mother-in-law Almina’s footsteps, running the manor home, attending to the needs of the staff, and hosting friends and royals as she raises her young son and daughter at Highclere. While Catherine admires Almina’s example, she does not share her predecessor’s strong personality and zest for entertaining—nor, sadly, her happy marriage. Quiet, thoughtful Catherine is deeply hurt by Porchey’s escalating extramarital adventures and eventually the indignity becomes too much to bear. She bravely dissolves her marriage and leaves Highclere to resettle in London as a divorcée with her two young children.

As Porchey hastily remarries and years later Catherine follows suit, the pair find new challenges and passions to occupy their days. Life continues on around them as Britain and Highclere Castle become embroiled in the Second World War. Catherine’s new husband joins the Navy, Porchey becomes an officer, and their son Henry also serves. The Castle once again joins the war effort—just as Almina transformed Highclere into a hospital during the Great War, the house doubles as military lodging and a refuge for evacuated children.

Drawing on Highclere’s extensive archive of diaries, letters, and photographs, the Countess of Carnarvon has crafted another compelling chapter in her home’s true-life history. Lady Catherine is a thoroughly modern heroine, facing love and heartbreak, navigating divorce and remarriage against the backdrop of war and financial crisis.

LADY FIONA CARNARVON married the current Earl of Carnarvon in 1999, and they took over Highclere Castle ten years ago. The couple lives at Highclere with their son.