The 4% Solution by the George W. Bush Institute

Inaugural book from the George W. Bush Institute unveils solutions on how to grow the economy. 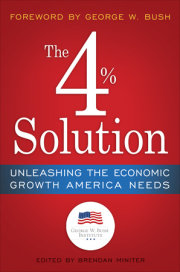 “Rather than discuss dry and dated theory or sit back and watch economic policy play victim to politics, THE 4% SOLUTION sets the ambitious goal of sustainable GDP growth of four percent and provides actionable solutions to reach that goal,” said James K. Glassman, executive director of the Bush Institute.

THE 4% SOLUTION includes a foreword by President George W. Bush and introduction by Glassman.  Edited by Brendan Miniter, the Institute’s editorial director, THE 4% SOLUTION features chapters from five Nobel laureates and other leading thinkers. Some of the contributors are:

–  Robert Lucas on the history and future of economic growth.

–  Edward Prescott on how government spending programs can hurt the economy.

–  Myron Scholes on why innovation is crucial.

–  Gary Becker on why our economy will continue to need immigrants.

–  Vernon Smith and Steven Gjerstad on how the housing market impacts the broader economy.

–  Steven Hayward and Kenneth Green on how the U.S.’s own energy reserves can ignite an economic boom.

–  Kevin Hassett on spending, taxes and a roadmap to 4% growth.

THE 4% SOLUTION offers clear and unflinching ideas on ways to revive America’s economy.

THE 4% SOLUTION is a cornerstone for the Bush Institute’s 4% Growth Project (www.fourpercentgrowth.org).

George W. Bush is the forty-third president of the United States.

James K. Glassman is the executive director of the George W. Bush Institute. He was formerly undersecretary of State for public diplomacy and public affairs. He is the author of several books on finance.

Brendan Miniter is senior editorial director of the Bush Institute.