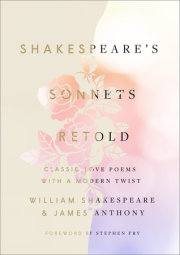 “A dazzling success . . . Aside from the pleasure any reader can derive from this achievement, schools and colleges will stamp and cheer with unrestrained gratitude and delight.”

An enlightening and entertaining collection of the most esteemed love poems in the English canon, presented alongside ingenious retellings that use contemporary language accessible to any reader

Shakespeare’s sonnets are some of the most revered love poems ever written. They beautifully capture the full range of human experience—passion, heartbreak, deception, jealousy, reconciliation, and mortality—and students and scholars have pondered over their meaning for centuries.

Yet, to many modern readers, the sonnets remain inaccessible, the depth of beauty and messages often obscured by the seemingly unintelligible language. And thus, sadly, the greatest collection of love poems ever written is seldom read outside the classroom.

Enter James Anthony, a former technology entrepreneur and engineer with a personal passion for poetry—particularly the kind with a strict adherence to beat, rhythm, and rhyming patterns, which he likens to the very best pop songs. He found himself drawn to the rewarding 14-line structure of Shakespeare’s sonnets, but, like so many, he also found their abstract language frustratingly incomprehensible.

One day, out of curiosity, Anthony rewrote Sonnet 18—“Shall I compare thee to a summer’s day?”—line by line, in the strict iambic pentameter and rhyming patterns of the original, but using contemporary language today’s reader could easily grasp. The meaning and sentiment—difficult to spot initially—came to life, revealing new intricacies in the workings of Shakespeare’s heart:

And so, James embarked on a full-time, year-long project to rewrite all 154 of the Bard’s eternal verses resulting in SHAKESPEARE’S SONNETS, RETOLD: Classic Love Poems with a Modern Twist (Three Rivers Press, November 13, 2018), a collection of masterful reinterpretations that brilliantly demystifies and breathes new life into Shakespeare’s work.

In the same way that Lin Manuel Miranda’s Hamilton has given us a fresh appreciation for an important historical figure, Anthony’s contemporary rewriting of these sonnets helps us to imagine the human side of “Will Shakespeare,” who today might be the most popular Instagram poet or the moody MFA student you had a crush on in college. Assuming the poems were written from his heart, they reveal much of who Shakespeare really was, including a deeper look at the sometimes overlooked themes of queer love, masculinity, and race that appear throughout. With a foreword by Stephen Fry, this stunning new collection ensures Shakespeare’s originals can be understood by all.

WILLIAM SHAKESPEARE was born in 1564, the son of a glove maker from Stratford-upon-Avon, and spent much of his adult life in London. He is widely regarded as the greatest writer in the English language. Shakespeare’s poetry first appeared in 1593, dedicated to his patron Henry Wriothesley, 3rd Earl of Southampton. It is unknown when he wrote each sonnet, but the collection was first published in 1609. He died in 1616, aged 52.

JAMES ANTHONY was born in 1970, the son of an engineer from Peterborough, and has spent much of his adult life in London. James cut his teeth building cars for the Ford Motor Company in Dagenham. Shakespeare’s Sonnets, Retold is his first published work of poetry. James is still seeking an aristocratic patron. He lives in New York City with his beloved wife, Versha.