A Journey from Oregon to Patagonia, and a Quest for a Life with No Regret 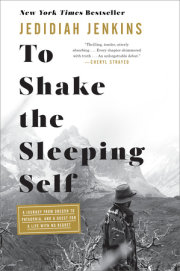 Praise for Jenkins:
“A thrilling, tender, utterly absorbing book. With winning candor, Jedidiah Jenkins takes us with him as he bicycles across two continents and delves deeply into his own beautiful heart. We laugh. We cry. We feel the glory and the agony of his adventure; the monotony and the magic; the grace and the grit. Every page of this book made me ache to know what happened next. Every chapter shimmered with truth. It’s an unforgettable debut.”
—Cheryl Strayed, bestselling author of Wild and Tiny Beautiful Things

“Jenkins’s words are brutally honest and leave me thinking a little deeper about my own observations when I pass a stranger on a street or see a flower blooming on a rocky trail.”
—Outside magazine

“Jedidiah Jenkins is a storyteller. He’s also an adventurer, a connoisseur of good pour-overs, an avid Instagram user, a start-up cofounder, and one of those humans who makes everything about them seem inviting.”
—USA Today

“Jenkins is a guy deeply connected to his personal truth and just so refreshingly present.”
—Rich Roll, author of Finding Ultra

“This is much more than a book about a bike ride. This is a deep soul deepening us. Jedidiah Jenkins is a mystic disguised as a millennial.”
—Tom Shadyac, author of Life’s Operating Manual

Turning thirty is a major milestone for anyone. For Jedidiah Jenkins it was the start of an extraordinary journey. Terrified of falling into a routine existence and the regrets that come with adulthood, he quit his dream job and spent sixteen months traveling 14,000 miles from Oregon to Patagonia by bicycle.

Jenkins’s physical adventure was matched only by his emotional motivation. Raised as an evangelical Christian, he spent his twenties trying to fit his sexuality into his faith without losing his connection to either. But after a decade of this struggle, Jenkins lost only himself. As he approached his thirtieth birthday, he announced his resignation from his job and—despite having no experience or training for a trip of this magnitude—his intention to cycle to Patagonia. Jenkins chronicled the trip on Instagram, where his photos and profound reflections on life and spirituality quickly attracted hundreds of thousands of followers and the attention of national media, from National Geographic to The Paris Review.

Now, in his unflinchingly honest memoir, TO SHAKE THE SLEEPING SELF: A Journey from Oregon to Patagonia, and a Quest for a Life with No Regret (Convergent; on sale October 2, 2018), Jenkins narrates the raw and deeply personal journey that started it all: the people and places he encountered on his way to the bottom of the world, the inner turmoil that prompted his trek, and his commitment to holding himself accountable for achieving his goal. As he traverses cities, mountains, and more, Jed grapples with the questions of what it means to be an adult, reconciling his identity with his upbringing and his belief in travel’s ability to “wake us up” to the wonder we often fail to see in our lives.

A soul-stirring read for the dreamer in each of us—and a testament to the power of speaking those dreams into existence—TO SHAKE THE SLEEPING SELF is an unforgettable reflection on adventure, identity, and a life lived without regret.

Jedidiah Jenkins is a travel writer, entrepreneur, and Instagram personality. A graduate of USC and Pepperdine University School of Law, Jenkins began his professional career with the nonprofit Invisible Children, where he helped orchestrate multinational campaigns to end the use of child soldiers in central Africa. His parents, Peter and Barbara Jenkins, are the authors of the bestselling A Walk Across America series. He is the executive editor of Wilderness magazine, and his work has appeared in The Paris Review, Good magazine, and National Geographic. Follow Jenkins at @jedidiahjenkins or visit www.jedidiahjenkins.com