Now in paperback: THE GLORIOUS HERESIES by Lisa McInerney 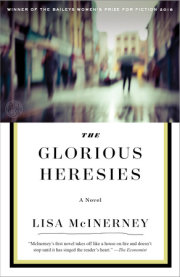 Praise for The Glorious Heresies

“Drugs, booze, obscenity, violence and black humor fuel Lisa McInerney’s audacious first novel. . . . The Glorious Heresies is impressive for its moral complexity, and for the energy and virtuosity of its language: a strange, pleasing music that lingers in your mind.” —The New York Times

“A wonderfully offbeat voice . . . McInerney’s characters aren’t what anyone would call saints, but they’re so richly drawn you have to respect the way they think and sympathize with their moral conflicts.” —The New York Times Book Review

“Lisa McInerney’s first novel takes off like a house on fire and doesn’t stop until it has singed the reader’s heart. Love, crime, and cockeyed redemption meet on a hardscrabble housing estate in County Cork, Ireland, in a rare blend of heartbreak and humour. . . . Ms. McInerney is a writer to watch.” —The Economist

“McInerney’s debut won the 2016 Baileys Women’s Prize for Fiction, and you can see why from the first page. Her lively, unexpected prose brings these characters—and the crucible of their surroundings—to life.” —Elle.com

“Wonderful . . . What could be a grim tale is lifted by McInerney’s eye for black comedy. . . . I would highly recommend it for the sheer musicality of the language.” —The Paris Review Daily

“A smart and sharp tale of Ireland’s fringe inhabitants, The Glorious Heresies only cements its author’s esteemed reputation as one of her nation’s most brilliant novelists.” —Refinery29

Lisa McInerney has been hailed as “arguably the most talented writer at work in Ireland today” (The Irish Times) and her arresting debut novel, THE GLORIOUS HERESIES (May 9, 2017; Tim Duggan Books), now out in paperback and set in the shadowy landscape of the Cork underworld, has been greeted with a wave of stunning international acclaim, including winning the 2016 Baileys Women’s Prize for Fiction. McInerney’s short stories have been featured on BBC Radio 4 and in Granta, The Stinging Fly, and the anthologies The Long Gaze Back and Faber’s Town and Country. She lives in Galway with her husband and daughter.

In this gritty, darkly comic novel, McInerney crafts a twisted web of shifting loyalties and betrayals while interrogating notions of salvation, shame, and the legacy of Ireland’s past attitudes toward sex and family. She quietly explores money, violence, and the unbreakable bonds we form with one another through the story of one accidental murder and its rippling effects on five people who exist on the fringes of Ireland’s post-crash society.

Additional Praise for The Glorious Heresies

“In the style of Colm Tóibín, there is great intensity to McInerney’s prose. . . . This gritty, urban character study will be perfect for readers favoring strong blends of literary and crime fiction, overlaid with striking dark comedy.” —Booklist

“This book is a riot. . . . McInerney’s sentences are like snowballs rolling down a hill, accumulating jokes and fecks and similes spun from pitch-black humor.” —Bomb

“A spectacular debut . . . Tough and tender, gothic and lyrical, it is a head-spinning, stomach-churning state-of-the-nation novel about a nation falling apart.” —The Telegraph (UK)

“McInerney has talent to burn.” —The Guardian (UK)

“A superb debut from a confident and comic writer.” —Mail on Sunday (UK)

“This is a daring, exuberant, and generous novel. And a work to which you will want—eagerly—to return.” —The Observer (UK)