In Such Good Company by Carol Burnett

Eleven Years of Laughter, Mayhem, and Fun in the Sandbox 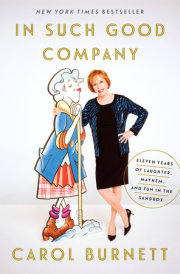 In Such Good Company

“It was a great decade for variety. . . . We taped our show on Fridays, in Studio 33 at CBS Television City in Hollywood. Sonny and Cher were taping in the studio next door to us. . . . A couple of times, both Sonny and Cher would do a surprise walk-on, much to the delight of our audience. The Smothers Brothers taped across the hall. During breaks, some of their writers—Steve Martin—would come over and watch us block a musical number or a sketch. Friday at CBS Television City was like one big dorm, buzzing with unbelievable talent.”

—From IN SUCH GOOD COMPANY

The sidesplittingly funny spoofs. The outrageous costumes. The Tarzan yell. From 1967 until 1978, America had a standing date with Carol Burnett, tuning in each week for hilarity to the hilt on a variety show that was in a class by itself. Capturing the hearts of viewers of all ages (while winning a whopping 25 Emmy Awards), “The Carol Burnett Show” combined wildly creative sketch comedy with elaborate mini-musicals. But her unique personal touches—from Burnett’s unscripted audience Q&A at the beginning of each show to her tradition of signing off with the song “I’m So Glad We Had This Time Together”—made it truly special. Now the iconic entertainer tells the little-known stories behind her television triumphs, with IN SUCH GOOD COMPANY: Eleven Years of Laughter, Mayhem, and Fun in the Sandbox (Crown Archetype, on sale September 13, 2016), chatting about such topics as:

Though the show ended its 11-year run in 1978, new fans continue to discover it the syndicated “Carol Burnett and Friends,” the show’s YouTube channel, and the recently released DVD set containing, for the first time, all 11 seasons of the show. Like a backstage pass to a once-in-a-lifetime performance IN SUCH GOOD COMPANY brings to life an era for everyone who loves great entertainment.