A funny, charming, and heart-wrenching debut sure to delight and inspire 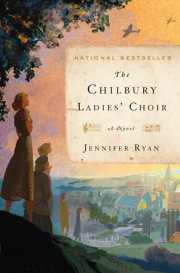 “There’s so much happening in Chilbury: intrigue, romance, and an unforgettable cast of characters who aren’t always as they appear. The Chilbury Ladies’ Choir is a charming slice of English wartime life that warms the soul like a hot toddy.” —Martha Hall Kelly, New York Times bestselling author of Lilac Girls

“The Chilbury Ladies’ Choir sinks you deep inside the rich, intricate atmosphere of an English village in the middle of war, when quiet lives are upended and secrets unravel. With her unforgettable characters and vivid narrative, Jennifer Ryan creates the kind of wartime novel that plays out over the intimate territory of the human heart—full of soul, full of hope. You’ll be thinking about this book long after the last page turns.”  —Beatriz Williams, New York Times bestselling author of A Hundred Summers and The Secret Life of Violet Grant

“World War II in an English village seen through the eyes of the most delicious cast of characters you’ll ever meet—The Chilbury Ladies’ Choir is a masterpiece of secrets, misdirection, village gossip, and gleeful disregard for anything but the main chance, as the home front learns to carry on. Seldom do you find a writer with such a deft touch—Jennifer Ryan sweeps the reader along to the very last page in a remarkable debut.” —Charles Todd, New York Times bestselling author of the Inspector Ian Rutledge series

“[Ryan] captures the experience of the war from a woman’s perspective . . . the letter/diary format works well and the plot elements satisfyingly come together.”—Publishers Weekly

“The book is well-paced, especially in the second half, and readers may find themselves furiously turning pages.” —Kirkus Reviews

Jennifer Ryan grew up surrounded by history. She was born in Kent, England, and although World War II had come to the picturesque coastal county decades before, the past very much still held a place in its present. The piles of rubble and half-demolished buildings left in the wake of felled bombs still remained, as did the air raid shelters around the parks and gardens where Ryan and her friends would play. It was the stories, however, that Ryan most remembers. As a young woman in Kent during the 1940s, Ryan’s grandmother had lived through the war and would share with her granddaughter memories of that time. Hers were not stories of fear or uncertainty or of the disasters of war—they were stories of bold women, full of pluck and an iron resolve who would see themselves transformed by their circumstances. With the war ever-threatening their borders, women had no time to comply any longer with the social norms of the day. Living in towns and villages virtually absent of men, women came together to support one another in unprecedented ways. They changed tires, fixed roofs, and kept households running and families together with the support of one another. They became stronger together, a sisterhood born of tragedy—a sisterhood that is the beating heart of Ryan’s debut, The Chilbury Ladies’ Choir: A Novel (Crown; February 14, 2017).

Inspired by the stories of her childhood, The Chilbury Ladies’ Choir transports readers to the English village of Chilbury during the early years of World War II. Fathers and sons, brothers and friends have gone away to join the war effort, leaving the women behind to find their own way. Through a series of letters and journal entries, Ryan introduces us to her central characters, the members of what became known as the ladies’ choir. The choir is initially shut down after the departure of its male participants, so more than a few eyebrows are raised when the choir is resurrected as a women’s group; but the choir and its music proves to be a salvation for the women, all facing their own personal battles. Mrs. Tilling, the widow wracked with worry over her only son who is fighting on the front lines; Venetia, the town beauty whose flirtations have landed her in a dangerous situation; Kitty, Venetia’s younger sister whose spirited quest for attention seems to have no bounds; and Silvie, a young Jewish refugee from Czechoslovakia who is hiding a family secret. Ryan skillfully draws readers into the lives of these women as we witness friendships formed and rivalries made, hopes that wither while others bloom, and where fear and courage are held in a precarious balance.

Like the characters it depicts, The Chilbury Ladies’ Choir is a wonderfully charming and enchanting novel. Remarkably insightful in its depictions of life lived under the harsh realities of war, it is a celebration of the power of the human spirit and the bonds of friendship and community. The women of Chilbury are sure to leave an indelible mark on your heart!

Rights to the novel have already been sold in twelve countries, and Carnival TV, the production company behind Downton Abbey, has optioned television rights.

Jennifer Ryan lives in the Washington, D.C., area with her husband and their two children. Originally from Kent and then London, she was previously a nonfiction book editor.