The Fantastical Saga of Oklahoma City, its Chaotic Founding, its Apocalyptic Weather, its Purloined Basketball Team, and the Dream of Becoming a World-class Metropolis 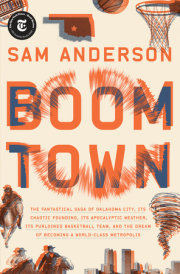 the great American story of civics, basketball, and destiny in Oklahoma City

“Reading Anderson’s time-traveling, civics-minded, and thoroughly person-focused story of OKC, one gets the feeling that his research didn’t uncover a single fact that he could keep to himself, and his enthusiasm for the city’s singularity—and the implications of it—is beyond infectious.”
—Booklist, Starred Review

“Written with style and amazingly good humor, considering the hopes blooming and dashed nature of both city and team, this should please a wide range of readers, from basketball fans to historians to city planners.”
—Library Journal, Starred Review

“An irreverent look at one of the nation’s quirkier cities… [Boom Town is] a rollicking [and] entertaining history of a city that, for all its booms and busts, is never boring.”
—Kirkus Reviews

“[Anderson’s] first book, Boom Town, is a hilarious history and drive-through study of this Midwestern city born of bedlam and ambition… Anderson digs relentlessly into the state capital’s boom-and-bust history. Illustrated with archival photos, his story jumps between top-flight sportswriting and more lighthearted and diverse chapters on the idiosyncrasies of OKC.”
—Shelf Awareness

“Maybe you didn’t know that Oklahoma City was the key to everything. But it is. Boom Town is a bone-shaking thrill ride through civic history.”
—Nicholson Baker

“A wild ride of a book that goes from fascinating to hilarious to hair-raising to powerfully moving, sometimes in the space of just a few pages. With clear-eyed affection and consummate skill, Anderson shows us an amazing American place wherein we recognize ourselves.”
—Ian Frazier

“No one—no one—writes like Sam Anderson: so vividly, so stylishly, so smartly, so weirdly, so funnily. By the time I’d finished this doozy of a book, he had me asking: Oklahoma City, where have you been all my life?””
—Anne Fadiman

“In Boom Town, Sam Anderson shrewdly anatomizes the deep strangeness of Oklahoma City—its messy history of hope, self-subversion, and occasional wretched luck—and of its citizens’ grandiose belief in their capacity for renewal and greatness. The result, a yarn that deftly navigates between then and now, brims with wit, bright color, relentless reporting, and, most admirably, empathy.”
—Mark Singer

“Sam Anderson is a visionary artist who sees what others can’t; he’s a master wordsmith who creates beauty and light from confusion and plunging darkness; he’s our tour guide to a better tomorrow because he understands a complex and foundational history that is our launching pad to new and unexplored universes.”
—Bill Walton

Sam Anderson arrived in Oklahoma City with a simple magazine assignment: to cover the city’s new (stolen) basketball team, the Thunder. This turned, very quickly, into an obsession. It wasn’t just the team that grabbed him. As Anderson wandered the city’s streets, talking to its citizens, and uncovering its wild history, he became convinced that Oklahoma City was unlike any other place in America—“one of the great weirdo cities of the world,” as he puts it in the book’s prologue, “as strange, in its way, as Venice or Dubai or Versailles or Pyongyang.”

The basketball team, including its star players and its brilliant General Manager Sam Presti, had become intertwined with powerful historical forces at the city’s core: its desperation to be a world-class metropolis, and its constant tug-of-war between order and chaos. The 2012-2013 basketball season was a hinge moment—in trading young superstar James Harden, Presti was gambling that he could harness the city’s chaotic energy through a meticulous Process that would yield a generation of championship teams. But he was betting against the very nature of OKC: the city’s long and idiosyncratic history of hubris, explosive growth, sudden busts, and self-sabotage.

BOOM TOWN: The Fantastical Saga of Oklahoma City, its Chaotic Founding, its Apocalyptic Weather, its Purloined Basketball Team, and the Dream of Becoming a World-class Metropolis (Crown; August 21, 2018) is the product of Anderson’s remarkable journalistic instinct and five years delving deep into Oklahoma City in all of its idiosyncratic charm. In its exploration of a singular place, BOOM TOWN shows us a city as a microcosm of the American experiment, where the question of how people live together, come together, and make a collective life refuses an easy answer.

With passion, curiosity, and an ability to transform even the most superficially mundane topic into something fresh and exciting, Anderson joins the ranks of great essayists like Joan Didion, Annie Dillard, David Foster Wallace, and John Jeremiah Sullivan. Anderson’s stylish wit, intelligence, and engaging prose invites readers in, and the book unfurls a brilliant, kaleidoscopic narrative—a great American story of civics, basketball, and destiny that delights as much as it informs. BOOM TOWN is the history of Oklahoma City you never knew you needed.

Sam Anderson is currently a staff writer for The New York Times Magazine. Formerly a book critic for New York Magazine and regular contributor to Slate, Anderson’s journalism and essays have won numerous awards, including the National Book Critics Circle Balakian Citation of Excellence in Reviewing. He lives in New York with his family.