The New Way to Win It All 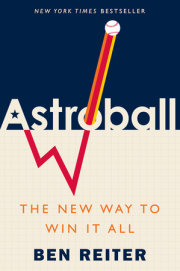 ** A New York Times Bestseller **
The definitive account of how the Houston Astros blended data and the human factor to win the 2017 World Series, from the Sports Illustrated writer who predicted it three years earlier.

“Ben Reiter has written the definitive, untold story of the biggest turnaround in recent baseball history. This riveting behind-the-scenes account offers fresh insight into the executives who built the 2017 World Series champions—and the players who delivered. Astroball is Moneyball for the next generation, not just the baseball book of the year, but the business and ideas book of the year as well.”
—KEN ROSENTHAL, two-time Sports Emmy winner for Outstanding Sports Reporter

“Ben Reiter’s incredible access to the World Series champions makes for narrative as riveting as a Game 7. But Astroball is so much more. It is a look at the future, and not just of baseball. For all the talk of computers replacing human judgment, the most complex problems are often best addressed when computers supplement human judgment rather than supplant it. The Astros’ human-algorithm partnership turned a historically bad team into a champion in six years. Other industries, take note.”
—DAVID EPSTEIN, bestselling author of The Sports Gene

“Reading Astroball is like being part of the Astros’ Decision Sciences team or having a seat and a laptop in their Nerd Cave. Ben Reiter gives us an inside look at the state of the art of winning baseball: packed with cutting-edge technology, psychology, and analytics, but allowing for the human element.”
—TOM VERDUCCI, bestselling author of The Yankee Years (with Joe Torre) and The Cubs Way

“This book is the definitive look at the recent history of the Houston Astros and how they became the model franchise for the present and future of MLB. Ben Reiter takes you through the evolving blueprint that delivered both a championship in the fall of 2017 and a roster built to win for years to come. Reiter called it first, on the cover of Sports Illustrated in 2014. I wish he would pick my stocks.”
—JOE BUCK, three-time National Sportscaster of the Year and bestselling author of Lucky Bastard

“Astroball is a superb and unfettered look at how a championship baseball team is constructed. Analysis and algorithms might be the new baseball card numbers, but Ben Reiter gets close enough to Jeff Luhnow and his staff to understand their incredible forward thinking when it comes to the human factor. This book is readable rocket science.”
—RON DARLING, former New York Mets All-Star and bestselling author of Game 7, 1986

“Astroball is Moneyball 2.0, a fascinating dissection of the processes by which the Houston Astros rose from perennial cellar dwellers to World Series champions. Ben Reiter systematically uncovers the crucial elements to success in baseball; as a fan of the game and as a major league pitcher, this book forced me to look at my sport through a wider lens. Detailing the ascension of the Astros while entertaining with colorful anecdotes, Astroball is a must-read for those looking to improve in any industry.”
—CRAIG BRESLOW, twelve-year Major League Baseball pitcher

In June 2014, Sports Illustrated declared on their cover that the Houston Astros would win the World Series in 2017. At the time, the club was more than bad: they were an embarrassment, riding a three-year losing streak—the worst the sport had seen since the early 1960s—with no discernible signs of improvement. The story, combined with the specificity of the claim, met instant and nearly universal derision. People thought that the article’s author, Ben Reiter, was crazy.

But three years later, the critics were proved astonishingly wrong. How had Reiter predicted it so accurately? But more important, how had the Astros pulled off the impossible, and in such a short amount of time?

With ASTROBALL: The New Way to Win It All (Crown Archetype; July 10, 2018), based on years of unprecedented access to Astros players and executives, Reiter has delivered the definitive account of the team’s unexpected rise to win the 2017 World Series and a deep-dive first look into the pioneering analytics system that made it possible: an ingenious blend of advanced statistical models (a descendant of the type famously created by Billy Beane in Moneyball) with quantified human evaluation and experience that will soon become an industry standard. Using a character-driven narrative that follows everyone from the players to the general manager, Reiter shows just how Houston’s brain trust—led by GM Jeff Luhnow and Sig Mejdal, the rocket scientist turned baseball data guru, and his analytics team—turned a laughingstock into a champion.

When Luhnow and Mejdal first arrived in Houston in 2011, they had already spent years trying to determine how human instinct and expertise could be blended with hard numbers (on-base percentages, strikeout rates, etc.) to guide their decision-making. In Houston, they had free rein to put their knowledge into practice to remake the club. No longer would scouts, with all their subjective, hard-to-quantify observations, be at odds with the stats guys. Instead, Luhnow and Mejdal found a way to correct for biases in human observation and roll their scouts’ critical input into their process. And Reiter reveals exactly how this new dual strategy led to the key personnel decisions—draft picks like Carlos Correa and Alex Bregman; the development of George Springer, José Altuve, and Dallas Keuchel; the acquisition of veterans Carlos Beltrán and Justin Verlander (who was brought on board despite the conclusions of Sig’s algorithms)—that were the building blocks of the 2017 squad.

While ASTROBALL captures all the excitement and glory of an underdog team’s road to victory, it’s far more than just a baseball book. Sitting at the nexus of sports, business, and ideas, ASTROBALL offers an inside look at the cutting edge of evaluating and optimizing human potential, with far reaching applications. In an age in which we are deluged by data, with the specter of job-killing artificial intelligence on the horizon, the Astros’ positive results are proof of concept for a new way of thinking about how humans and computers can bring the best out in each other. It demonstrates that, perhaps, success is not a matter of man or machine, but of man plus machine—as long as man remains in charge.

About the Author:
BEN REITER is a senior writer for Sports Illustrated, which he joined in 2004. He has written twenty-four cover stories for the magazine. His SI feature “The Seeker: The Complicated Life and Death of Hideki Irabu” won the 2017 Deadline Award for Magazine Profile. He lives in New York City with his family.